Winter is here and with the cooler air, I remember how the chill always affected Jim’s breathing. My husband, Jim, was diagnosed with pleural mesothelioma and the colder air, while welcome after the summer heat, was always more difficult for him to enjoy.

We found ways of enjoying the fall colours while travelling in the car, with the windows up, heat on. Seeing frost on the windows meant another extra layer and warming the car up more than usual. A skiff of snow might mean a day inside. Slipping, falling were very real concerns and plowing, shoveling and sweeping became even more important. I also remember how much beauty there was in seeing winter snow arrive for the first time and Jim being unable to go out and enjoy it like he always had. 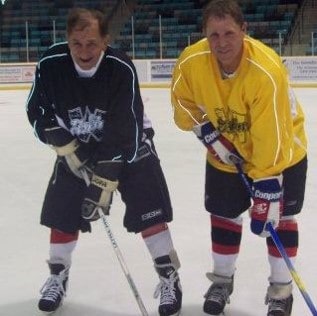 Jim Dahmer, left, at team reunion
Jim was a hockey player and winter meant hockey season. Through the latter time of Jim’s illness, his hometown hockey team, the Waterloo Siskins, had a 60th reunion and he was invited to attend. He was determined to skate with his former teammates. Every week, we went to the arena and he skated, ever so slowly, around and around. Each week, a little faster, a little stronger. He made it to the game and skated several shifts, while oxygen waited on the bench. Very special memories were made as he was able to enjoy the game with his son Paul, who had also played for the team. We made it a family week with kids and grandkids. A beautiful, special time for all of us.

Winter always makes me think of Jim and the struggles he had and how he persevered through his setbacks as so many happened during the winter. He also took much pleasure in sharing his journey with others. While he was able, he was a much-loved Speaker’s Bureau member and was thankful if he could help even one person. We were fortunate to speak at a number of conferences and a highlight of each year was always attending the Family Forum.

Later, winter came to mean it was soon time to go south. Jim loved travelling while he was able. The breathing came much easier in the sunshine and by the sand, outside. He found fun wherever he could and winter took on a new life when you could spend some of it in shorts and a tee shirt!

Jim passed away in the fall, just before winter arrived and I will always remember the first snow that came after that … it was not as bright and beautiful as before nor as fresh and clear.

Every year, the first snow holds deep meaning for me and I’m reminded of those so very special times we shared.

Heather Dahmer
Heather is a Volunteer Family Guide - a role she took on so that she could help to provide the comfort and understanding that had helped both her and Jim along the way.