The anniversary I needed 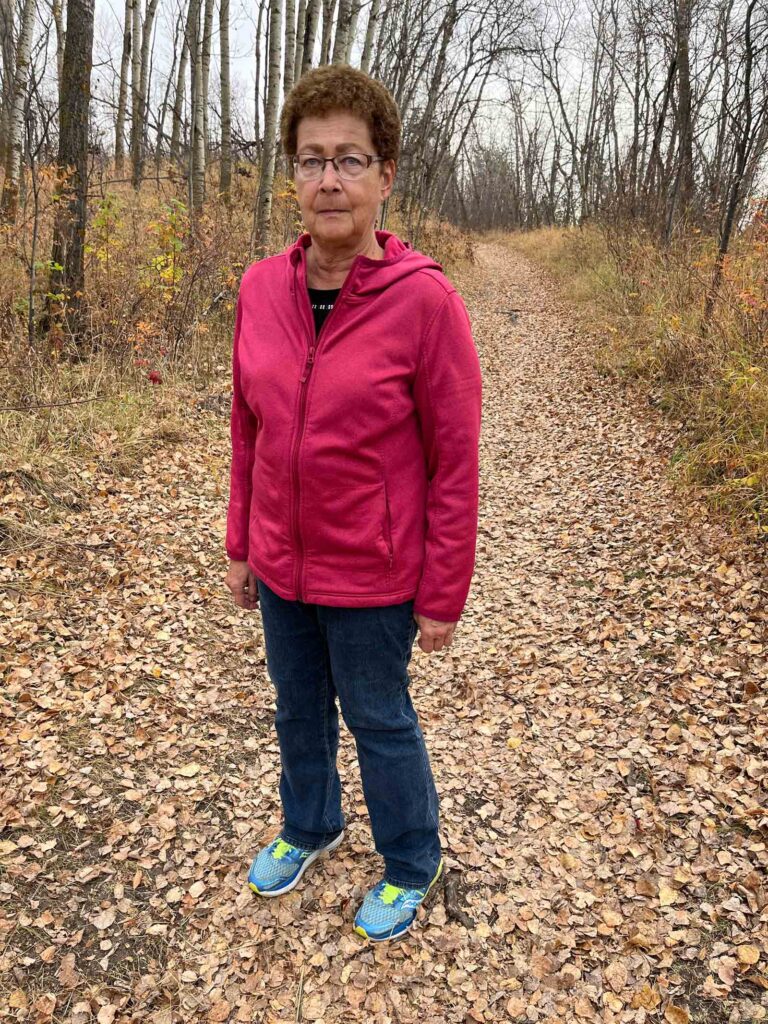 Donna out for a a nearby hiking trail at Peace Hills Park. She didn’t make it to the conservation area for the anniversary, but she still made it out to enjoy some fall hikes.

As I anticipated the 10th anniversary of David’s death, the word “decade” came into my mind.  The denotation, or meaning, of the word “decade” is “10 years”.  David has been dead for 10 years.  And each year since David’s passing has meant that I am further along in my healing journey and can now focus on the love and joyous times I had with David, and not just on his death.  But at the same time, the connotation – the implication and association – of the word “decade”, has meant that I have now had 10 years to forget the sound of David’s voice and his laughter, to forget how he moved and walked, to forget how it felt to give him a hug, and to forget how wonderful it was to have David and his family in my home on a regular basis.  A decade is a long time to forget so many details about David.

This year on David’s decade anniversary, I decided to do something special and take advantage of the sunny, warm weather.  When David was a teenager, he was very involved with the Scouting program and one of his favourite activities was to go hiking.  I had located a natural conservation area not too far from where I live, with18 km of hiking trails that include some steep climbs.  I had already done several hikes there during the summer.  I planned to do a long hike on October 17.  I knew David would love it there as much as I did.  There are no bears or cougars in the natural area, so I felt quite safe hiking alone.  However, there are moose and it is exciting to come across a moose near the trail.  My plans for remembering David on October 17, 2022, were set.

But then something happened.  On October 14, I had dental surgery.  It was much more invasive than I had thought.  The inside of my mouth was full of stitches and my face and roof of my mouth were swollen.  My dentist strongly suggested that I not do any strenuous exercise for a week.  That meant it would not be wise to go on a long hike on October 17, the decade anniversary of David’s death.  Was I disappointed?  Oh, yes.  Was I totally crushed?  No.  Because I didn’t want to postpone my dental surgery and I wasn’t totally sure how I would be feeling afterwards, I had prepared a plan B in case my hiking plan A did not occur.

David was my youngest child and the last one to leave home.  After his sisters had flown the nest, one of the things David and I enjoyed doing together was watching really cheesy, low-budget science fiction and horror movies.  We’d laugh hysterically at the campy dialogue, poor acting, amateur special effects and unbelievable plots.  I had previously recorded my plan B movie about gigantic mutant carnivorous rabbits, who attack humans to get revenge on those who culled the overpopulation of regular-size rabbits.  As I watched that movie on October 17, I laughed hysterically at the campy dialogue and cheesy special effects.  My favourite line was when the sheriff told the townspeople to flee to safety because “a herd of killer bunnies is headed this way”.  I wondered how many takes were necessary before the actor saying that line could do so with a straight face.  And as I laughed loudly at the campy dialogue, the cheesy special effects and the unbelievable plot, in my mind I could hear David laughing with me.  On the decade anniversary of David’s death, all of the sudden, I remembered what his laugh sounded like.  How grateful I was for that blessing.  When plan A fell through, plan B brought me more than I could have imagined.  It’s amazing that while the universe did not give me what I wanted, it did give me what I needed.  And after a decade, I needed to hear David’s laughter and remember the sound of his voice.  Life is full of small miracles.  And on the most difficult day of the year, one of them came my way.

Donna Van Bruggen
Donna Van Bruggen is the mother of three adult children, and lives in Central Alberta. She enjoys practicing yoga, going for long walks and long distance bicycle rides. Donna is a volunteer family guide and speaker with Threads of Life.