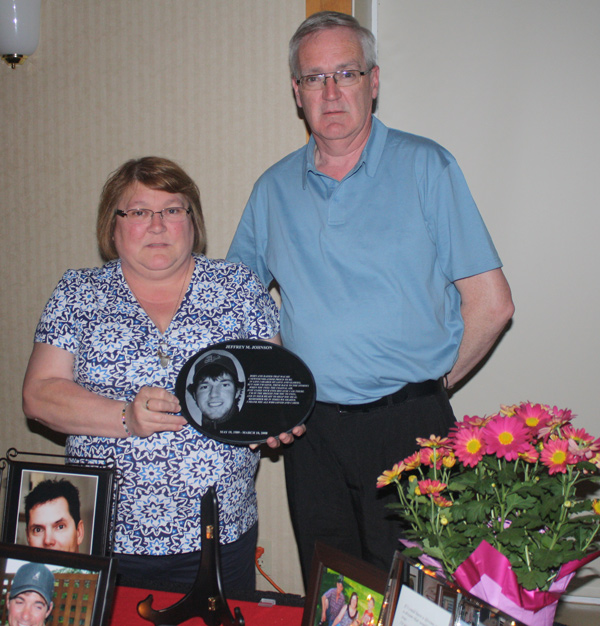 On March 10th, 2008 we lost our son Jeffrey in a workplace accident. For the next couple of years I was existing in a very dark world. I felt lost and so full of guilt. One evening while watching the evening news something caught my attention. It was the news brief for the Steps for Life walk. I listened to what it was and what it represented and I was captivated by it. I immediately went to my computer and Googled it and sent an email to Shirley Hickman. Within two hours I had a reply back. Shirley called me that week and we talked on the phone for well over an hour. She told me about the family forum and how I should attend. I thought about it in the days following and decided no I really did not want to go. I didn’t want to be a part, or I should say didn’t feel I should be a part of that group. After much consideration I did decide to attend.

The day to leave arrived and I had so much regret for saying yes. I still had the feeling that I didn’t want to belong. I arrived at Oak Island with a very heavy heart not knowing my reactions. I took part in the reflections ceremony and I attended the sessions and over the course of that weekend I realized something that changed my outlook on many things. I realized I wasn’t alone; that there were others that felt the same pain and heartache and guilt as me. We were all travelling this different path of life. By the time the weekend was over I knew I belonged; that I was a part of this group. I was a part of a very extended family. Even though I return home emotionally exhausted after each family forum I attend, I gain so much hope and love from the weekend with my extended FAMILY.

In 2015 I was honoured by being asked to facilitate the men’s session. I agreed to do so but a couple days later I began to have second thoughts. I wasn’t sure I was capable or experienced enough. Each year I do a talk at the high school graduation ceremonies and present a scholarship in memory of our son Jeffrey and I always focus that talk on Jeffrey’s story and on workplace health and safety, but I still wasn’t sure I could facilitate the men’s session. My wife Coreine always gives me a boost of confidence and she said, “You know you can do it” and so I followed through.

To say I was nervous would be an understatement. I prepared mentally and always I have to see something on paper in front of me, but the morning of the session I had nothing. I wanted to be able to focus on what was in my mind and to always be a listening ear. I told the group gathered that it was my first time doing something like this, so please forgive me for any mistakes. I feel the session went well and the members of the group told me afterwards that it was a good session. As men we feel we are supposed to be the strong one; we tend to bottle up some of our emotions inside and focus more on our spouse and our other children and making sure they are okay. This can sometimes be very negative and push you into a very dark place that you have to fight very hard to get back from. The men’s session helps you talk to other men and in doing so it makes you realize that never are you alone. There is always someone on that same path.

(This post was originally published in the Fall 2015 newsletter.)

Glenn Johnson
Glenn Johnson is a Threads of Life family member and an active volunteer, living in Newfoundland. In 2008 Glenn’s son Jeffrey was killed on the job while working in Alberta.