My hero, my Dad 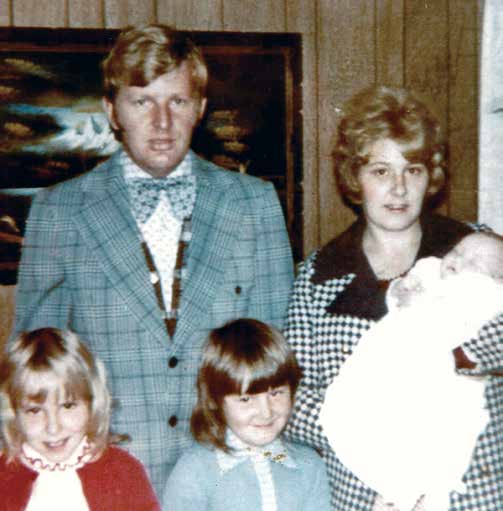 Cathy left, with her family before her dad’s injuries

It’s so very dark out. I can hear sirens; there are so many people in my house. What is going on? A priest enters the back door with a couple of men; my mother falls to the floor. She is inconsolable. Who are these men? Who are all of these people? Family members start to arrive. There is a lot of chaos and confusion. My Uncle Johnnie sits us down and tells us that my father was in an explosion in the pit; he was hurt really bad and it wasn’t looking good. Wasn’t looking good? Was I supposed to understand this? I am 12 years old, I am the oldest of three girls. My sister Georgina is 11 and Holly is only four years old. Such a dark day in my childhood. The flash backs are hazy. I often wonder if they are real memories or nightmares. This day is forever etched in my mind. It is the beginning of a journey which has forever changed our lives.

February 24, 1979 at 04:10, our world came to a screeching halt. A mine explosion in #26 Colliery in Glace Bay, Nova Scotia took the lives of 10 miners and sent six more to the Halifax Infirmary– one being my Dad, George Stubbert.

We were told very early that his chance for survival was slim. Eighty percent of his body was third-degree burns, he was in shock, in a drug-induced coma and the burns were so severe he was unidentifiable from the other miners. When he did start to wake up, we were never allowed to visit him in the hospital, as this was his wish, always protecting his girls. There would be multiple reconstructive surgeries, skin grafts, and wound care to facilitate healing. Treatments were excruciating and for every tear my father cried a nurse cried right alongside him, this he would always remember. The medical team became his family and his strength. Surgeries and treatments would continue for many years.

When he arrived home from the hospital months later, he was a stranger; he did not look like my Dad. His interactions were minimal and he was very reserved. I wanted to hug him, to talk to him but I was afraid. The scars on his face and his hands looked sore and the compression mask he had to wear was scary. The big apparatus on his hand and fingers looked similar to a torture contraption. He was thin. Before me appeared a shell of the man I knew as my father.

My youngest sister Holly was four years old. She did not discriminate; this was her Daddy. She ran to him and showered him with affection and love. She was too young to remember the before and after. She loved openly and freely with lots of hugs. She had lots of questions but the innocence of a child made them easy and safe for him to answer. This little girl was instrumental in initiating the emotional healing of our family. I’m sure she is very unaware even today of the magnitude of her actions as a child.

It was difficult to watch my father struggle. He secluded himself, not wanting the public stares. People were so inconsiderate. My dad was 30 years old when the explosion occurred. He was affectionately known as “Handsome George” by his miner coworkers. When he looked in the mirror now there was pain and sorrow for all the losses he had suffered. Then one day he decided it was time to share his story and educate people. We knew he was on his way back to us.

Dad has been diagnosed with PTSD but as a family we all suffered. Every day has challenges. We are all very aware when someone goes out the door they may not come back. My father’s greatest sadness has been my mother’s passing. For so long she had been his strength. He has often said when he was lying in the hospital after the explosion, he had the option to leave this world at any time. He chose to fight to stay alive to protect “his girls” and he always has. The pain and suffering he has endured is not lost on us.

And protect us he did – he raised us like princesses. This continues today, and we are so proud to call him our Dad. This tragic workplace accident has shaped us into the adults we are today. I am a Registered Nurse, currently employed as the Manager of Clinical Services and Clinical Projects in a long-term care facility. My middle sister, Georgina is a Continuing Care Assistant with a background in Mental Health in Assistive Living and the baby Holly is a loving/mentoring teacher in Manitoba. Our successes in life have been the result of this strong, supportive, loving man we call “Dad” who never gave up.

Cathy McNeil
Cathy is a family member and a Registered Nurse, currently employed as the Manager of Clinical Services and Clinical Projects in a long-term care facility.