5 years later: Turning the same age my big brother was when he died on the job 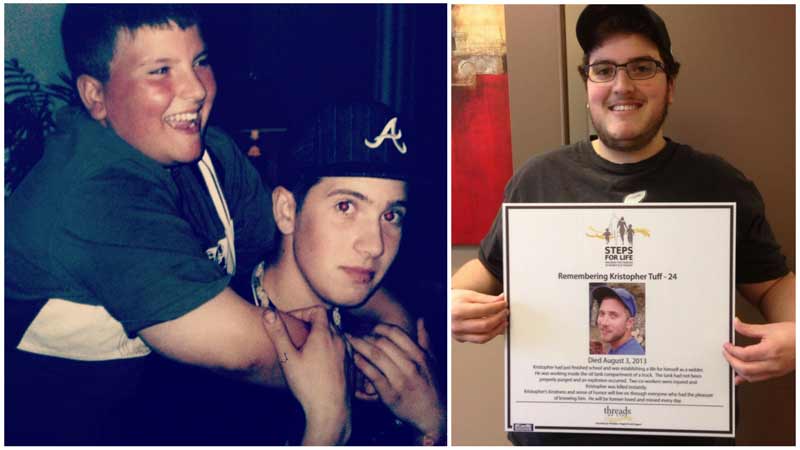 August 2018 will be five years since my big brother Kris was killed in an industrial accident while at work. He was instructed to enter a tank that had not been properly cleaned, to remove a baffle; a device used to restrain the flow of a fluid, liquid or gas. The baffle was double-walled with diesel fumes trapped inside. It’s at that moment, an explosion occurred and Kris was fatally injured.

This is also the year when I’ll be the same age as Kris was when he died. For some families who experience loss, they may find it difficult when their loved ones have been gone longer than they have been living. It’s truly a weird concept when you get thinking about it! Does that officially make me the older one? This unwanted milestone reminds me that life is too short to take for granted. I often wonder if me and Kris were the same person. Us being six years apart, when he was 24, I was only an immature 18-year-old boy. I couldn’t even imagine being 24 at that point. While it was only six years apart, Kris’ wisdom often led me to believe he was much older. But now, I wonder if our values and aspirations were alike. For myself, I’m looking at purchasing my first home and hopefully flying the coop, something that he was not given the opportunity to achieve. Besides turning the same age as your deceased siblings, other age-related events can be triggers as well. Graduating from college, buying your first car, getting married and having children can be milestones that turn bittersweet after a death of a sibling. In the normal course of events, older siblings get to do all those things first. Like many times in our lives, a certain level of guilt sets in for the younger siblings when they realize they are enjoying a privilege that their older sibling did not live long enough to enjoy themselves. No matter how much more I achieve, I’ll always have the memories with my brother – the missing part of my life.

As the 5th-year anniversary creeps up, it feels as if I’ve achieved something. Do they give out medals for this sort of thing? The emotional roller coaster ride made that 18-year-old boy turn into a well-rounded young man who was forced to grow up and try to understand something that, at the time, made zero sense. While I don’t agree with the cliche statement “things will get better”, I can say, you learn to become the conductor of that roller coaster and allow yourself to feel that loss for as long as necessary. But you see, that’s the little catch with grief. It sneaks up on you. One day you feel like you can master the world, and the next, the sky is falling around you. And that’s okay! This is because sibling loss is so misunderstood. I know from my own experiences, I’ve received many messages that make you feel like you should be over it by now.

Most people don’t understand sibling loss until they’ve reached their golden years and their siblings pass away of old age or other health-related causes. It’s never about getting over the death, it’s about getting out of bed every day, taking off the mask and rolling with the punches on your own time. Turning 24 will no doubt come with a fear that surpassing his age would be like moving on from the one person who could beat me up without getting in trouble like the little annoying brother I was. The past few years have been pretty difficult, trying to find the new normal. While I was fortunate enough not to fall into a state of disrepair, I quickly found that self-care was the best medicine for me – eating a better diet, trying to exercise daily and reducing unneeded stress. It took me a while to understand that surpassing his age isn’t moving on from the good and bad memories or even the struggles we shared along the way, but it’s moving toward a brighter future while maintaining the mind set of who I was versus who I am today. I look forward to my future guilt-free accomplishments and knowing he would have been proud.

Read more about the sibling experience of grief, in our Fall newsletter. Watch for it in September!

Alex Tuff
Alex Tuff is a Health and Safety Advisor with WorkplaceNL. His passion for his career runs deep and he is forever committed to prevention of workplace tragedy, injury, and disease. He is a Threads of Life family member and volunteers with the speakers bureau and St. John's Steps for Life.