Returning to the Grief Journey 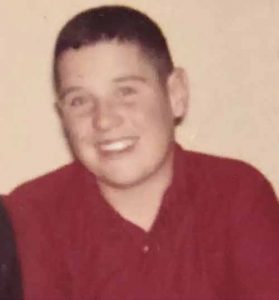 No answers, but memories and healing after 35 years.

I awoke in such a fright! I rose straight upright in bed that morning and jumped up to look out the window. Was I too late? Too late for what? I wasn’t certain what it was I was fearing? But I watched my mom pull out of the driveway with my brother Greg next to her. I thought to myself – he was going to work again today, despite the torrential rains that had been falling for two days now.

My brother Greg, would not come home that day.

Greg, or as he was better known, “Potsie”, was quite a character. He was that free spirit who loved to work in the outdoors. He had spent several years wearing a suit and managing a People’s Jewelers store. That was a job my dad had set him up with and he was really good at that too. You see, Greg was a true people person. I recall once being in an “establishment” I probably should not have been in at my age. I saw my brother, 11 years older than I, arrive. I watched him as he sat down at a table by himself. Within seconds several people were flocking to him. I have a feeling he was probably a bit of a “life of the party” kind of guy!

Greg loved music; he loved to play electric guitar and he had a great voice! He was an athlete, playing hockey since he was a toddler, lacrosse and he played high school football.

With such a large age difference between him and me, I didn’t always feel like I knew my brother very well. But what I was sure of was he was the only family member that would always call me Sandy instead of Sandra, and I liked that. He also was the one who could say “I love you” so easily.

Greg was often seen in his denim overalls. He had black curly hair, a long mustache, a pot belly of course thus the nickname Potsie, and the warmest of smiles. He was a sweetheart of a man and desired a simple life.

In 1978 after my dad passed away suddenly from cancer, my brother Greg headed back out west to be with a woman he loved and their daughter, and got back to working in the outdoors. That lasted about a year and he returned home. My mom and I were so glad to have him back, near to us. He quickly secured a job with the regional municipality.

At that time, my other brother, Brad, had had two daughters and Greg was such a natural uncle to them both. He loved kids and I am sure he would have been an awesome dad to his daughter, Shishane, even though she lived thousands of miles across the country.

On April 29, 1980, at the age of 28, Greg lost his life while on the job. It was the second day of torrential rains. The day prior, I remember proclaiming he should not be working in those conditions, me all of 17! He had come home with those denim overalls covered head to toe in mud!

On the day of Greg’s death, I arrived home from school and got down to my usual routine – changed to go pick up Greg at the dump site and then he would drop me off at the riding stables. Before I left, my mom mentioned the police were apparently looking for him? I didn’t think too much of that as he could get into trouble occasionally.

I left but for some reason something wasn’t sitting right and I turned around and went back home. As I arrived there was a police vehicle and another vehicle I didn’t recognize. I walked in the front door. Up in the living room I saw an officer and the church minister. And then I heard it – Greg had been killed that day at work. It was beyond unbelievable – and I couldn’t bear it! We just lost my dad two years earlier! I ran out of the house!

I remember going through our park and punching a light post. I was gone for about a half hour and as I returned, my brother Brad and his wife were just arriving. Thinking back now I am ashamed that I left my poor mom at this most horrific moment in her life. A thought that still haunts me now despite the closeness I had with my mom for the remaining years of her life.

No one would tell me what happened to my brother that day, until two of my friends let it slip. I couldn’t imagine the horror Greg must have faced – while he trudged in six inches of mud spotting for a bulldozer, he tripped and fell and was crushed by the bulldozer.

That very day it was reported that the municipal council was actually debating the operation of this site where my brother worked. The councillors were apparently at odds as to whether a private contractor or regional staff should be operating the landfill site. Upon the news of my brother’s death a decision was made that day that all earthmoving equipment was to be contracted to a private operator. It was too late for Greg. I don’t believe any one person or organization was held accountable for my brother’s tragic death! And now, 39 years later I still ask the question: Why was he working in those conditions? And who was responsible for making the decision for those workers to be there? Was the operator of the bulldozer properly trained? Was he certified to be operating the equipment? Did my brother’s employer know that he was flat-footed?

So many unanswered questions have remained as I, my mother and brother Brad, really could never talk about it. There had been a hearing, but those details I am unaware of and perhaps have never wanted to know any more? We never sought support of any kind and never attempted to litigate. I believe my mom just needed to move on – just too painful to keep the tragedy close and talked about.

So even though my brother’s death happened so long ago, the grief never goes away. It was buried deep in my soul for many years so I would not have to face the pain and sadness. Finally, after 35 years I started to work on that grief. As I watched my mom’s failing health, it became that much more important to me to understand what had happened to my brother and to have a voice for both him and my mom.

On January 21, 2019, my mom passed away. She was 96 years old. In spite of failing eyesight and a bit of dementia, my mom was spunky and on the move up until April of 2018 when she suffered a catastrophic stroke and was paralyzed on her left side.

This journey through life we venture on brings so many moments of joy, happiness and love but also pain, grief and sadness. So despite the years passing by, my message may be tough for some, but the grief does not dissipate, it may even grow. But we push through and onward in honour of the memory of our loved ones so that they will not be forgotten and that through our grief we can bring lessons of safety and care to the forefront.

Sandy Prong
Following a 20 year career in the Hospitality Industry, Sandy is now an Interior Decorator and Professional Home Stager. As Sandy began to face her grief over the loss of her brother Greg, she was introduced to Thread of Life and has chosen to support this charity in both her personal and professional circles. She is a wife and mother of one teenage daughter, Brielle.