Researching my ancestors: How genealogy research helped me in the path of grief 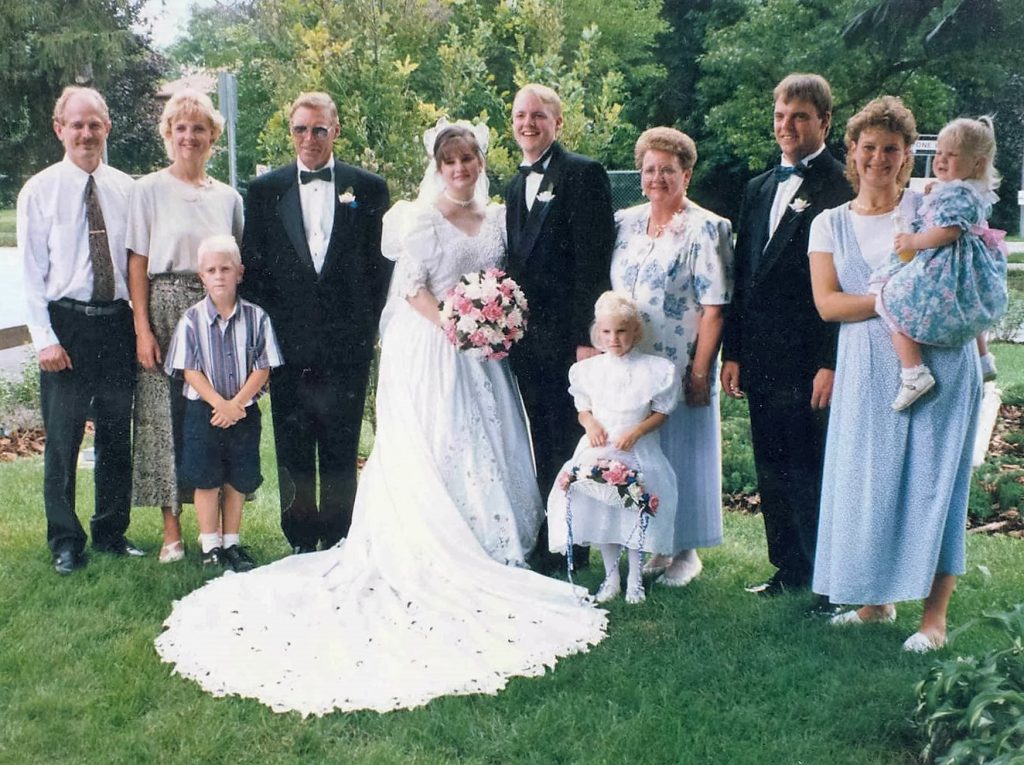 Liz and Dick Van Rooyen stand proudly on either side of the bride and groom.

“Why would anyone try to find their long lost relatives?” as my son Rick loves to point out.

My story begins as a six-year-old immigrant child who came to Canada in 1948 (I am giving away my age!) with my parents and younger brother. My sixth birthday was celebrated in the Netherlands with all my uncles, aunts, cousins and grandparents. My last memory of my grandparents, is that of them waving goodbye and crying, as we boarded a bus that would take us to Amsterdam to sail to Canada. I never saw them again. Other immigrants came with extended family, certainly some of my friends did. But none of our relatives immigrated here to join us. We are thankful that many of them have visited us, sometimes several times! One of my aunts knew my interest in my ancestors, and she provided me with copies of several generations of marriage registrations, plus copies of marriage photos. I was hooked and had to discover more.

During this time period, I compiled information of my first husband, Dick Van Rooyen’s family in time for the golden wedding anniversary of my in-laws. He came from a family of 11 children and 56 grandchildren. Dick’s cousin, who lived in the Netherlands, was preparing to publish the story and history of the Van Rooyen family and asked me to help him with the information on families living in Canada. His research of the times and the photos of the various periods beginning with the late 1500s to the present time was extremely interesting and solidified my resolve to also look into mine. The problem was: how was I to research my ancestors if the information was in the Netherlands and I was in Ontario?

Dick was killed while working on a road construction job site, August 27, 1998. My three children had their own families; my siblings and father lived hours away; I had retired the year before, and I had time on my hands. The Church of the Later Day Saints (Mormons) had built a Family History Centre to their church and they issued an invitation to the Historical Society – of which I was a member – to come and research ancestors. They provided a genealogist to help you navigate the computer and order microfilm that you would need.

I began with a known: my grandfather’s birth. He was born in 1880, and I knew the county’s name. The microfilm was put on a reader at the Centre and I worked my way through the film. I was blown away. Not only were my grandfather’s family records scrolling on the screen but also my grandmother’s family records were in the same county. There were the details of their lives, ages, occupations, where they lived and their signatures or their Xs if they were illiterate. That was the beginning of my serious research. When I was engrossed in trying to read the Dutch language and writing, I could for a time focus on something else beside my raw grief. As I ordered films of deaths, I was struck by the amount of deaths of babies and young children. My maternal grandfather was one of the two children who survived to become adults from a family of seven children. Can you imagine the grief the family must have suffered? I wonder if their mother could hope that each baby would make it or did she become a bit distanced to protect her feelings? I don’t know.

The more I researched, the more I discovered grief. Young mothers died in child birth, sometimes leaving a baby who invariably died within months afterward. If there were other young children, the father would soon remarry, and usually had more children. How was remarriage for them and their families?

A few years later, the internet provided web sites in Holland and I researched at a Dutch website. I discovered that an ancestor who was a mayor of a city, and was my 10th great grandfather in the 1600s, had been murdered. His body had been found the following morning along the roadway, his daughter later wrote. At the time of her writing, the murderer had not been found. What a shock to the family! It was a shock to me when I read it. Wow! How horrible for the surviving family! I could almost feel the grief. I felt a connection with this family. Did the police come to their door to tell them the news of the death? I remember the day when two policemen came to give me the news of Dick’s death.

I was reminded that there was still the experience of joy and thankfulness in everyday living. People also had times of joy, with weddings, and anniversaries. When looking through newspapers from the 1700s online, the wording of thankfulness that they felt jumped from the ads posted. I was reminded to count my blessings. My children and my grandchildren certainly brought a smile to my face. I almost felt that the ancestors were reaching back to remind me they also had walked this path. When I read the history happening during the various time periods, I see their lives in the context of what was happening in their world. It is not just a compilation of facts, dates but also of relations, and day-to-day happenings. You can see that when you peruse old wills and court cases of the past. I discovered that widows with underage children, would have a court-appointed guardian for them, quite often a brother-in-law or other male relative. That was the case for several hundred years.

My research has spanned the centuries, tracing many of the families to late 1500s and consequently, there are approximately 9,000 individuals of my parents’ families recorded on the database. Yes, I am also working on my husband Fred’s family and have almost 2,000 individuals recorded. Research involves detective work, but I do love a mystery! Fred and I sent our DNA to Ancestry.ca to be examined. Fred’s results were not surprising, but mine was not what I expected! Although my ancestors have lived in the Netherlands, I was only 47 per cent Western European, 38 per cent Scandinavian (Vikings raiding the coast?) and 21 per cent Great Britain. Great Britain? That is news to me! Now I am scouring the last names for clues of possible British ancestors. England is not that far from Netherlands, and during the early 1600s the Netherlands had 132 armies, but only 19 were actually Dutch. There were 43 English, 20 Scottish, 32 French, etc. during the Golden Age of the tulip trade, all working for the Dutch! So was one ancestor a soldier stationed in the Netherlands, or did the ancestor come on a cargo ship as a sailor? Was his story of emigration similar to what our family experienced?

I have become the family source for my grandchildren, nephews’ and nieces’ children, and supply them with information for school projects. I also have met fellow genealogists researching the same families. I am part of a group of four third cousins who are all researching some of my father’s families. We send our research via email to keep all of us updated. This is especially crucial when new information is found or if an elderly relative dies. We have met each other, and I count them as part of my blessings for interconnected family. You can be sure I will continue this worthwhile hobby.

Liz Webley
Liz Webley has been a Threads of Life family member since 2003. She is also a Threads of Life volunteer family guide and speaker. Liz has been twice widowed by workplace tragedy. Her first husband, Dick, was killed in 1998 while working as a highway construction supervisor. When Liz remarried years later, Fred had just been diagnosed with asbestosis caused by years of exposure while working in construction, installing ceilings in buildings and houses. Fred passed away in 2020.