“Life has not been easy trying to navigate this world alone.” 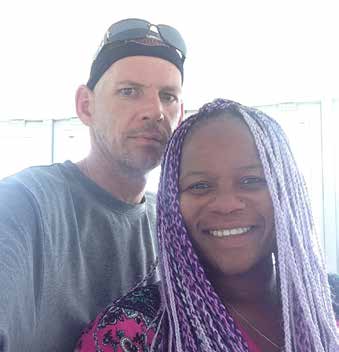 When I got married it was truly the best day that I could have possibly imagined. As I walked down the aisle and saw my future husband standing at the altar waiting for me, I knew we were going to be an unbeatable team. ‘Together forever until the ship sinks’, is what we always said to each other. Unfortunately, that wasn’t the case.

I met my husband Paul at work in 2010. When I first laid eyes on him my heart melted, and then when I heard him speak for the very first time, I knew instantly that he was the man I wanted to spend the rest of my life with. We started dating in 2012 and my instincts were not wrong. Paul was a caring, humble, and passionate man, who had a love for his family, friends, and me. His interest was driving his semi-truck, boating, fishing, and loving his dog Baloo. He liked to live simply; it didn’t take much to make him happy, just as long as he was with people and things that he loved. Our first date was the long weekend of August of 2012; he proposed to me on August long weekend of 2013; and we were married August 2 of 2014. Life couldn’t have been any better for us – for me I met and married my knight in shining armour. For the first time in my life I truly felt loved, genuinely happy, safe, and looking forward to spending the rest of my life with my husband. A few months later my dream of growing old with the man I loved came crashing down, and the world as I knew it no longer existed.

It was January 6, 2015 when my life shattered. The day started like any normal work day. Paul’s occupation was driving a sand truck, maintaining the roads for winter. Every day I would text him during the day just to see how his day was going. I would always hear back from him, maybe not right away but eventually he would text me back. But this day was different. I texted him twice, and called him in the afternoon but by the time I left work I still hadn’t heard from him. I just thought he was in the bush without any cell service. I went to the gym after work and called him right after I was done. By this time it was 6 p.m., and still no answer. As I made it home I was eagerly anticipating his truck to be parked in the driveway, but to my disappointment, he wasn’t home. Again I tried calling him that evening only to get his voicemail. I was still thinking in my mind that maybe he was out of cell range, but deep down I was getting a bit worried and had a feeling that something was not right. I remember texting his mom, and telling her that he wasn’t home yet, and that hopefully he would be soon. By this time it was around 9 or 10 at night, and my plan was to wait til about 11 and if he wasn’t home to start making some phone calls. As I sat on the couch waiting I feel asleep and woke up at 3 a.m. Paul was not home. I remember a tear rolling down my cheek as I scrabbled to find numbers. I got hold of one of his coworkers, and they were going to go look for him and get back to me. I crawled into bed with my bible, waiting for some sort of news; again I feel asleep clutching my bible. January 7 at about 7:30 a.m. there was a knock at my door. I quickly sprang out of bed thinking it was Paul, that maybe he forgot his keys, but as I looked out the window, there were two police officers standing outside. They told me that Paul had an accident at work, and that he had passed away. I screamed, crying hysterically, backing away from them. All I could say was “no”. What were these cops telling me? I woke up with my husband the day before and now they are telling me that he’s dead. How can this be!

January 6 and 7 will always be the days that my life and world changed. There are still pieces that are blocked from my memory, and there are images that will forever be embedded in my memory. The female officer helped me get dressed that morning, as I needed to make my way to Paul’s mom’s house to tell her that her last born was dead. As we made our way to his mom’s, I made phone calls to his friend and Paul’s brother, still in disbelief letting them know. We arrived at his mom’s. I can remember the crying, all the commotion, people coming in and out, so many people texting me, that I had to give my phone away. I just couldn’t handle it, I was in complete shock.

As days went on, I had to be taken to the hospital by ambulance, given sedatives, and my daughter had to monitor me while I took my showers. I had no energy. I wanted all of our wedding pictures off the walls; I wanted all the flowers that people were sending me out of the house. I spent most of the days in my room crying out for Paul, not eating. I just wanted my husband back; I just wanted to be back in his arms; I just wanted things to go back to normal. A couple of days later the policeman came back to the house to bring me Paul’s belongings. I wanted the clothes he was wearing, his wedding ring, and his wallet. Well I got his wedding ring and wallet, but nothing else. That day I had my family around me, and that’s when the officer told me that Paul had became stuck in the auger. I remember seeing the look of horror on people’s faces, but I still couldn’t comprehend what the cop was telling me. As people tried to explain I just wasn’t hearing it or I didn’t want to hear it.

The day came when I finally got to see Paul after the horrible news. This is one of the images that will be forever embedded in my memory. Paul looked like he was sleeping. I was warned prior that some spots on his face were red with frostbite, and that some of his limbs were affected. Nothing could ever prepare a wife to see her husband like that. Paul’s left leg was gone from the knee down, his right arm and leg were mangled. The only limb that wasn’t affected was his left hand, his wedding ring hand. Seeing evidence that an autopsy was done on him was just devastating to me. Paul went through this by himself, he died alone and had to make that journey alone. I should have been there for him. He was so cold; I tried so hard to warm him up, but nothing was working, nothing at all. I sang to him the last verse to the gospel song Abide By Me, kissed him, then had to leave him. The next big heartache was to make it through his funeral. In August we were at that same church taking our vows, and now I am back to give him the send-off that he so deserved. I don’t remember much about his funeral to this day. I do remember the church being full of people, the looks on people’s faces, and all the cars that were outside. I wrote Paul a letter that I read at his funeral. I had my three sisters standing behind me as support. When I was done I went up to my husband’s casket, and laid my head on top of his casket, where I kissed and hugged him for the very last time. I watched as his pallbearers carried him to his final ride and watched him drive away from me. Now I was left to go home to start the daunting task of packing his clothes away.

It was months after that I started finding out more about what happened that fateful day of January 6. Paul was working alone at the time; the last time Paul was seen alive was before 2:30 in the afternoon. I will never know the exact time Paul took his last breath, or what exactly happened, but the truck he was driving had previous issues. It appeared that when it was really cold outside there were issues with the auger getting jammed, and they were using a shovel as a temporary solution to get the sand through. A part was on order, but hadn’t come in yet. If it did maybe things would have been different. Paul was found in the back of the hopper wedged in the auger with a shovel nearby, completely frozen solid. The loader and truck were both still running when he was found. They had to do a partial amputation on his left leg, and dismantle the truck to remove him. He was working alone at the time, and there was no safety cover on the back of the hopper to protect him from moving parts. The impact of the auger ripped his clothes off from the waist down. One runner and one pair of gloves were missing. It is not known how much blood Paul lost because it was mixed in with the sand. Paul’s personal half-ton truck was parked at his employer’s from the time he left for work that morning, up until after he was found and no one even noticed.

Now I am left to find a new normal, to adapt to a life without Paul. Life has not been easy trying to navigate this world alone. I think about him every day. I have suffered secondary losses, such as financial loss, the loss of my job, changes in friendships, and learning how to trust and love again. With the help of WSIB, I started college in September of 2015, graduating in May of 2017 with a diploma as a Social Service Worker, and am now working for Child and Family Services. I have made, and taken comfort in new friends that have also lost their husbands and I became a proud grandmother to a granddaughter in 2018. I still cry for my husband, but I am finding that I have more good days than bad. During my journey, I also became a speaker for Threads of Life. This is how I will honour and keep Paul’s memory alive, by sharing my story. If only I help just one family, then Paul’s death won’t be for nothing.

Virginia Campeau
Virginia is a family member and volunteer speaker.