Marino Toppan and Paola Breda are volunteers with the Italian Fall Workers Memorial and authors of the new book Land of Triumph and Tragedy: Voices of the Italian Fallen Workers.

The Italian Fallen Workers’ Memorial Wall Project started with one man’s dream; a man who had seen more than his share of fallen workers during his tenure as labour leader during the late 1950s and early 1960s in Toronto’s busy residential construction industry. Those had been very turbulent times in Canada’s labour history, as Marino Toppan later realized. Labour leaders had been pressed into action by the horrific story of Gerardo Trillo, the Italian immigrant woman who suffered a terrible fate directly related to the plight of the Italian immigrant workers. 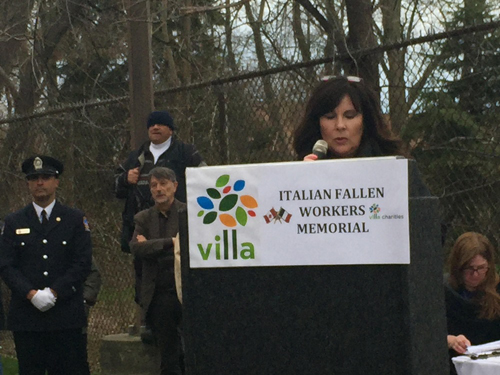 Threads of Life family member Erin Pitruzella speaks at the unveiling of the Italian Fallen Workers’ Memorial Wall on April 28, 2016.

A few years later, the tragedy of Hogg’s Hollow was to seal the fate of these union leaders in their quest to right the wrongs of the industry against the workers. On a fateful day in Ontario labour history, March 17, 1960, five Italian immigrant workers were suffocated in an underground tunnel near York Mills, where they were working to connect sewer segments. Through the efforts of Toronto Telegram reporter Frank Drea, this tragedy made its way to traditional media in the city.

After this tragedy, and Drea’s “slave immigrant” slogan, Toronto would never again be blind to the plight of the Italian immigrant workers. Both the Trillo Tragedy and the Hogg’s Hollow Tragedy pushed labour leaders like Marino Toppan, Frank Colantonio, Bruno Zanini, and Gerry Gallagher into action. Together, this group of union leaders was to mobilize and unite the workers, completely paralyzing the construction sector in Canada’s biggest city during the summer of 1960 and the again in the summer of 1961. Though the strikes did not give the workers much immediate relief, they were to be the catalyst for sweeping changes in Ontario’s legislation surrounding workplace safety — with other provinces following — which ultimately benefitted all workers in our great nation. 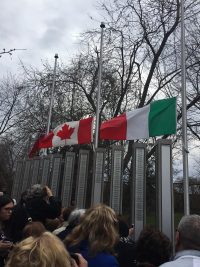 Left with terrible reminders of so many tragic deaths during that period — and for years later — Marino Toppan knew that he would have to pay tribute to the thousands of workers of Italian origin who lost their lives building up this country. It took a half century of dreaming for Marino, along with his committee, to finally complete the Italian Fallen Workers Memorial Wall, although names continue to be added daily. The Memorial Wall rests honourably and humbly on the grounds of Columbus Centre in Toronto, having been unveiled on April 28, 2016. It is a true testament to the huge price Italian workers paid here in Canada after they immigrated. This has truly become a newly uncovered chapter not only in the history of Italian immigrants, but also in the story of Canada.

Italian immigrant workers came to Canada to work hard and improve their destinies by building up this country. There was no choice: dire poverty dictated the journeys of millions of Italians who immigrated to Canada for a span of over a century between the 1880s and the 1980s. They went where there were jobs, so that they could escape the centuries-long chains of sharecropping back home. Although they didn’t realize it, Italian immigrants would fall into yet another trap after their immigration – the trap of the fallen and injured worker.

After gaining a significant historical body of work during the research phase of the Memorial Wall, Marino Toppan, Paola Breda, Lillian Paiano, Vincenzo Pietropaolo, Angelo Bolotta and many others, joined together to publish a new book on the Italian-Canadian immigration history: Land of Triumph and Tragedy: Voices of the Italian Fallen Workers. This book of almost a thousand pages has many newly uncovered facts of the history of the Italian community in Canada. The story of the staggering number of Italian fallen workers can no longer be denied; Italians truly seem to have paid the highest price in numbers of fallen — a sad legacy.

With all the respect and honour they deserve, the voices of the thousands of Italian Fallen Workers have finally been heard. It is through their personal tragedies that we have learned the full story of our immigration history – the real history of the Italian-Canadian immigration to Canada.

To find out more about the book, please visit: www.ItalianFallenWorkersMemorial.com.

Latest posts by Marino Toppan and Paola Breda (see all)