A Funeral in Place of a Wedding 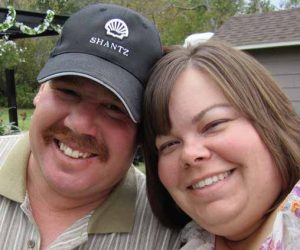 Sean was a truck driver: it was his passion. If there was a vehicle with a motor, he would want to drive it. As soon as Sean was finished school, he got his class 1 licence and never looked back. He hauled gravel, rock, asphalt, water, and liquid sulphur just to name a few.

In November 2009, I met Sean. Instantly we were inseparable. I know it sounds cliché, but we were soulmates. Sean was my best friend; we spent all of our time together. If we weren’t talking on the phone or texting, we were working on our motorbikes, sleds, camping, or going for drives. Sean loved going for drives. If we both had the day off and Sean said, “Let’s go for a drive!”, I always grabbed our passports because I never knew if we would end up in Kimberly, Kalispell, Whitefish, Coeur d’Alene or anywhere in between.

October 2010, after 10 months of driving eight hours one way every weekend to visit and spend time together, I moved from central Alberta to the Crowsnest Pass, in southern Alberta. Sean and I had a little piece of paradise. Our tiny house in the shadow of Turtle Mountain was what most people could only dream of. We spent our summers camping and using our ATVs or cruising the highways on our motorbikes. In the winter we sledded on those mountains we called home.

December 2011, we got engaged. Sean was so excited he couldn’t even wait for Christmas to ask me to marry him – we were engaged on the 23rd of December. We were both excited to start this new journey together.

2012 flew by with wedding plans and working, but due to an ill family member we had to postpone our 2013 wedding. After four years together we decided that July 3, 2014 was to be our day. We were going to invite everyone over for a BBQ and a surprise wedding. The invitations were made; we had the licence, the dress, everything was perfect.

June 6, 2014, one month before our wedding: that Friday started like any other. Sean had found a local quarry job only two months earlier and was off to work. We were up early in the morning. I made Sean his lunch and coffee and walked with him out to the truck like I did every morning. I gave him a hug and kiss goodbye, told him I loved him, and he left for work.

I worked at the local grocery store and the day at work was busy like every Friday in the summer. There were lots of campers and seasonal guests picking up their groceries. In the afternoon I saw the firetrucks and ambulance go west of town and assumed there was the usual highway accident with a camper on Highway 3, a routine occurrence during the summer months in the Crowsnest Pass. After work I headed home to wait for Sean to arrive for supper.

Around 6:30 pm there was a knock on the door. You see it all the time in the movies: two police officers discussing as they walk to the door who would deliver the bad news. Then they tell the family whatever horrible news it is and the shock and crying and wailing starts. I tell you honestly it is way worse in real life. I thought one of the neighbours was stopping by – a regular occurrence in our house – yet when I opened the door, it was police officers. They really didn’t need to say anything. I already knew; I just didn’t know how bad it was.

The officers asked to come in, and they told me there was an accident on the worksite and that Sean was dead. That’s it. He was dead. I didn’t cry, I didn’t wail; in fact I was quite numb. They asked if I had someone to stay with me and I said no. I asked if I could call my mom. I was a 37-year-old woman asking if I could call my Mommy … The officer said sure. I’m sure he thought that I was a real winner! With shaking hands, I managed to dial my mom’s number but then when she answered I could not talk; I handed the phone over to the police officer and made him tell her what had happened.

At 7 pm, Friday night, my mom and brother jumped into their car to drive the eight hours to be with me. Three of the very best women I know stayed with me until 3 am when my family showed up.

Then it started: the questions, the unanswered questions.

I had no idea what had happened to Sean except that there had been an accident at work and unknown to me at the time, no one could answer my questions due to the ongoing investigation and the fact that the medical examiner does not work on the weekend. The funeral home wasn’t returning my calls, the police… no one… I felt helpless. I found out through a friend that there had been no rock to haul that day so instead of sending Sean home they had him helping a mechanic do repairs on the small bus that hauled the workers up to the mine site, and that during those repairs Sean had been crushed under that bus.

Something I haven’t mentioned up to this point is that Sean was born with cerebral palsy. It left him with a limp and very little use of his right hand. He could hold things but had very little feeling in that hand. He didn’t know how hard he was gripping things. Our snowmobiles all had left-hand throttles so he could sidehill, but other than that, especially as he got older, he just looked like he had at some point in time had a stroke. He couldn’t “mechanic”; he wasn’t trained as a mechanic. Sean was a truck driver, and he had been hired to haul rock down from the quarry to be used for flood mitigation after the floods the summer before. He shouldn’t have been working on that bus.

The next week was a blur of friends, family, questions and funeral plans. Instead of finishing wedding plans I was planning a funeral. No one should ever have to substitute a funeral for a wedding. The Miner’s Club in Hillcrest was standing room only for Sean’s service: everyone had one last drink and a meal with Sean. Two of the things you could count on Sean for 1) that he would show up for any meal and 2) he always had time for a beer with a buddy.

I was at a loss for what to do in the months after Sean died. The person I spent my every waking moment with was gone. I did not have anyone to talk to who could relate to my story. I had to wait months (in some cases years) for any kind of reports or answers about the incident. In the back of my mind I remembered seeing a brochure in amongst the massive amounts of paperwork you have to fill out after someone dies: it was for a group called Threads of Life.

I looked Threads of Life up online and reached out to them on Facebook. It was a scary first step for me as a new widow. I wanted to be “normal” like everyone else, and suddenly my new normal included this wonderful, caring group of individuals.

Through Threads of Life I was matched to a wonderful woman as a family guide who had a similar story to mine, and I attended my first family forum just four months after Sean’s death. There I found a whole community of support I could not have imagined. I’ll never forget the first workshop I attended at that forum. I do not remember who the facilitator was, I don’t remember the topic she was talking on, but I remember what she said. It was, “We are all here at this forum, members of a club we didn’t want to join!”

The week after Sean died, the company filed for bankruptcy. They closed up shop and walked away; they moved on to new jobs and their lives. I wonder if they ever think about Sean. I wonder if they have sleepless nights over his death like I do.

April 20, 2016, nearly two years after Sean’s death, the Occupational Health and Safety investigation was complete, and charges were laid against the company. I attended three court dates where no one from the company showed up. Charges were withdrawn on October 25, 2016, because there was no prospect of proceeding against the company due to the bankruptcy.

This was a disappointment; crushing really. When you lose a loved one you want someone to blame. I already blamed myself for letting Sean work at a job site which we knew had safety issues. Just weeks before Sean died, an employee’s truck had been backed over by a piece of machinery. I have to live every day with that blame. I blamed Sean for trying to do a job he was not qualified to do, and I have told him off in my head many times since then.

Christmas of 2016, I received the official Occupational Health and Safety report. When I read that report on Sean’s accident over two years after it had happened, it was upsetting but it answered some questions I had. It’s an 11-page document that, besides the medical examiner’s report, was the hardest thing I have ever read in my life. This process from June of 2014 to December of 2016 was relatively short, but to me seemed to take an eternity, and the emotional and physical toll it took I cannot do justice in a short article.

June 6, 2020: It has been six years since I lost Sean to a workplace tragedy. Is it any easier? Yes and no. I take time to honour his special days. I let myself cry and grieve, something I did not do for the first few years. I have since moved and remarried, which I thought I would never do. I love my new husband who honours Sean with me, we have pictures of Sean up in our house and Sean is spoken about regularly. My husband is supportive of my grief journey and he understands that Sean will always be a part of our life. I am a widow and a wife. There is room in my heart for both of them.

Cheryl Shock
Cheryl is a widow, a wife, and a speaker volunteer with Threads of Life.