Each year hundreds of high school students from all across Canada begin working for the summer, and for many this will be their first “real” job. Fifteen years ago, I was beginning my summer job at a golf resort on Prince Edward Island; I did not realize at the time it would change my life forever.

At the age of sixteen, I had aspirations of going to the Culinary Institute of Canada and becoming a chef. Most chefs begin their careers washing dishes, giving them invaluable exposure to working in the kitchen. This was my second season working as a dishwasher. It was hard work, but I was learning so much.

David shares his story with SafeGen – an organization working to build a community focused on the safety and wellbeing of youth entering the workforce.

On Friday June 13, 2003, it was an ordinary shift, early in the season and it was not busy. That evening I was working with Matt, a friend, and our duties included taking the garbage to the dumpsters at the end of the night. We were required to use the heavy-duty staff golf cart to carry the garbage to the dumpsters, which were located in another area of the resort. Looking back at it today, we should not have had access to the golf cart, as neither of us had our driver’s license. Coupled with a lack supervision … it was a recipe for disaster.

It was midnight and we were joyriding on the golf cart through the resort. I was in the passenger seat. We began doing donuts, very quickly around and around we went. We hit a rather large rock and nearly tipped the golf cart over, but instead I fell out onto the ground and he came back around and hit me. We were going so fast and it happened so quickly that there was no time to stop.

I remember laughing at first. Matt jumped out and asked if I was okay, “Yeah, I’m fine”. I then went to get up and it was at that moment, I knew something was wrong. I couldn’t move my legs. I told Matt and he thought I was kidding at first, but he then realized this was serious. Being sixteen, our biggest worry at that moment was how much trouble we were going to be in. I remember thinking, perhaps my legs are broken, but when I put my hands down to feel my legs, I couldn’t feel anything. I was in a state of shock.

I did not want to be left there by myself, so we did the worst thing we could possibly do: he tried to lift me up and into the golf cart. Considering that my lower half was dead weight, there was no way he was picking me up. He had to leave me there in the dark to go get help. I began thinking how my life was going to change, I was going to be in a wheelchair and all the activities that I would not be able to do, and I broke down and started crying as I looked up into the night sky.

I broke my back, a burst L1 fracture with spinal cord and nerve damage. In other words, the bone exploded upon impact and bone fragments went into my spinal cord and into the nerves in my back. I was sent to the QEII hospital in Halifax and had two major surgeries to try to repair the damage. Initially, I was told I would be a paraplegic and the chances of walking again were very slim. However, as I began to regain some feeling and movement in my lower half, my determination continued to grow that someday I would walk again. I spent the first couple years after the accident in an intense physiotherapy routine, learning to walk again and regaining strength in my legs and the trunk of my body.

The doctors told me after the fact, that it is very important to not move after a spinal cord injury. However, at that age I did not realize how important this was, nor was I ever in a situation where I needed to know this. It is hard to say how much additional damage was caused by me repeatedly sitting up and laying down, or when Matt tried to lift me up into the golf cart, but in any case the damage was done. 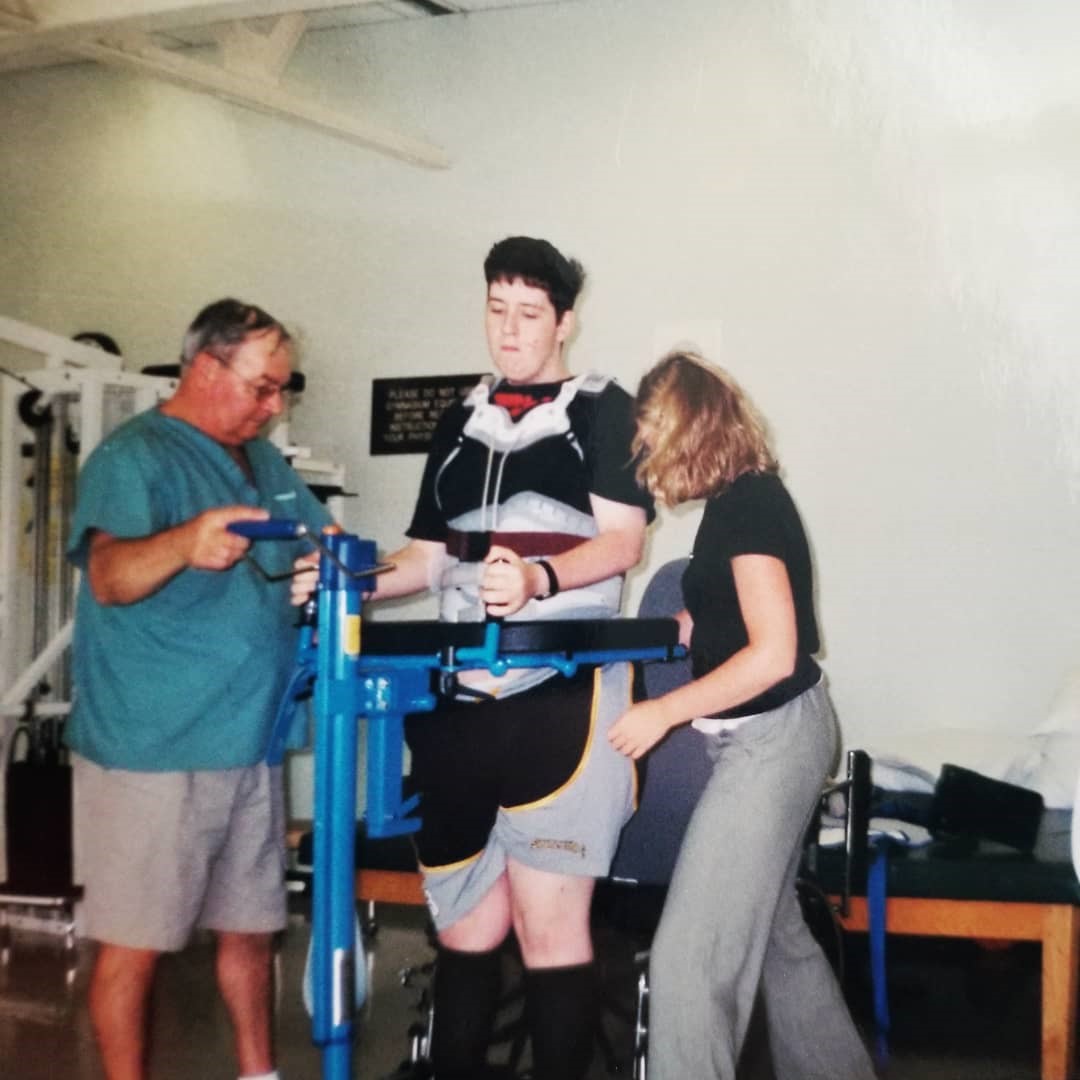 Taking my first step about two months after being told I may not walk again. #determination #nevergiveup

I can walk today. It’s at one speed only and I have incredibly bad balance. I’m considered an incomplete paraplegic, being that I’m still 55 per cent paralysed below the waist. In addition to the paralysis, I have chronic pain from the nerve damage. I cannot work in a kitchen environment, as I had dreamed of doing when I was a teenager. As you can imagine, my life changed in that very moment.

I do not blame the resort for allowing us to use the golf cart unsupervised, nor do I blame Matt. I was a willing participant. However, if the safety policies that were put in place after my accident were there before, the outcome might have been much different.

Young workers need to realize they are not invincible; accidents can and will happen. Although some will be more serious than others, no one wants to be injured on the job. Workers of any age have the right to refuse dangerous work – if in a situation you do not feel safe, you have the right to refuse. In addition, young workers should be proactive and ask questions regarding safety when they’re being interviewed for a job.

Employers who employ young workers have to be mindful that you are dealing with teenagers, and if given the chance to “goof-off” they most likely will. To mitigate the chance of a serious accident happening, employers need to conduct proper safety training. I was washing dishes, but did not receive any formal safety training from my employer, nor any training on operating the golf cart. In addition, young workers need to be supervised at all times. I had a carefree attitude and never thought that an unsupervised joy ride would change my life.

David Collins
David Collins is a Threads of Life family member, as well as a member of our speakers bureau. He has a background in marketing, project management and administration in the financial services industry. David currently resides in Charlottetown, Prince Edward Island. Follow David on Instagram: @collinsd14
Latest posts by David Collins (see all)