A lesson in perspective 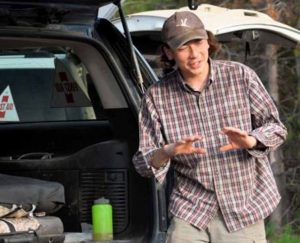 There are many ways to think about and understand the concept of “distance.” It can speak to measurable things like space and time, but also more abstract concepts such as emotion.

Our relationship with distance, too, is as varied as its forms. Sometimes we wish for less distance, sometimes we need more; an inch can be the threshold between life and death; a hundred miles may separate you from salvation. For me, ten years ago on a hot day in July, distance played all these roles.

The first thing that comes to mind when I think back to my accident and the role that distance played is obvious. Because we’d been travelling down a logging road with posted kilometer markers, I know that it was at exactly the 56.5 km mark on the Babine Lake forest service road in northern BC, that I was run over by a work truck, shattering my pelvis. That meant it was 56.5 km of logging road, plus a further 7 km of highway, for a total of 63.5 km, from where I lay broken and bloody under a truck, to the nearest hospital in Smithers, BC.

The distances related to my accident were not only agonizingly long, but also miraculously short. It was only by a matter of inches that the truck tire, centred on my hips as it rolled over my body, missed my spine and organs such as my liver and spleen, which could have left me paralyzed or dead in the back of a truck from internal bleeding, somewhere on that 63.5 km drive to the hospital. Distance can have a sense of irony too, as I couldn’t possibly have been closer to our designated emergency transport vehicle (which contained all the rescue equipment necessary to evacuate me), as it was in fact the vehicle that ran me over.

Importantly, surviving a workplace accident takes more than medical care; it also requires emotional and mental support. My greatest source of emotional support at the time was my fiancée, who was back at our home in Victoria, BC, over 1000 km away. I can’t clearly recall exactly when she showed up at my hospital bedside, bringing with her a sense of relief I could never put into words, but I do vividly recall how painfully lonely I was before she was able to cross that distance.

And then there is distance as in time. There was a long way for me to go to get back on my feet: seven months of recovery including two reconstructive surgeries, and dozens of smaller procedures before I was able to walk and to work again.

Although this may seem like a meaningless jumble about how distance – be it near and far, short and long, or quick and slow – can be good, bad, or ugly … there is meaning in the chaos and, perhaps, a lesson. After tragedy strikes, like my accident, and the accidents of so many other workers and workers’ families, we often find ourselves agonizing over “what ifs,” and distance can play a central role in that.

What if I had been a few feet to the left, what if there had been more space for the truck on the logging road pullout where I was crushed, what if we had been closer to town? But as we have seen, there is no clear way to tell for certain how distance may help or hinder. Maybe if I had been a few feet to the left, a different part of my body would have been run over instead, with a much worse outcome. Maybe if the time it took for me to recover to my new normal was shorter, I would have been left with more permanent limitations. Just like in reality, in the “what if” fantasy world, it is impossible to know in what ways shorter or longer or nearer or farther could have changed the outcome.

And so, the lesson I have taken from the seeming randomness of how different forms of distance played positive and negative roles in my experience with workplace tragedy, has been one of acceptance. It is a lesson in perspective that has helped me come to terms with what happened, how it happened, and to recognize that even if I could go back and change things, like the distances involved, I could never be certain in what ways that ultimately would have made things better or possibly worse.

Russell Claus
Russell joined the Speakers Bureau to share his experience and support the mission of Threads of Life. He has worked in health and safety in the forestry sector, and currently works as the Occupational Health and Safety Coordinator for the Atlantic Region of Parks Canada.