Six lessons from an old dog

He came to us when he was six months old. He needed a farm home because as a mostly border collie, he was steadily shredding the downtown city home where he lived. Now he’s 14, and it’s hard to remember a time pre-Riley. In the past few months we’ve been forced to admit that he’s an elderly dog, and he’s been teaching our family some important lessons. Sure, his philosophies are a little clichéd, but what do you expect from a dog? 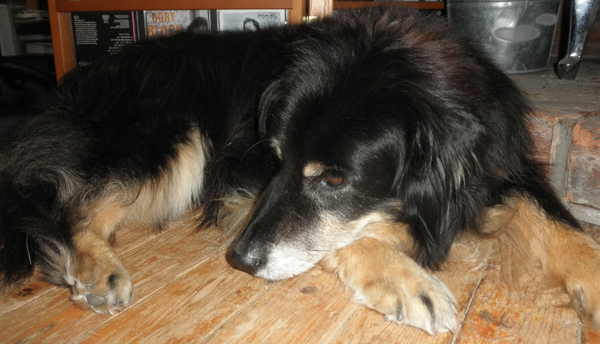 While he still breaks into a trot if the air is right or the tractor is going somewhere, Riley mostly walks these days. And what’s the big hurry anyway? You’ll get there when you get there.

After a recent bout with Geriatric Vestibular Syndrome – which looks a lot like a stroke but affects the inner ear – the vet told us to treat Riley, so he got cheese and lunch meat and eggs. He still won’t eat his dog food unless it’s laced with olive oil. But at his age, why not?

5  You’re tougher than you think.

Riley is deaf too. So not long ago, he fell asleep beside a visitor’s car, and didn’t hear when the engine started. One of the car’s rear wheels rolled right over him. Yes, our 14-year-old dog was run over. The driver was devastated, and we all prepared for the worst. But not Riley. We carried him into the house, and after lying very still for a while, he got up with a little help and asked to go outside. Cats are supposed to have nine lives, not dogs, but don’t tell Riley that.

6  Show your people you love them.

During the days he was recovering, Riley didn’t move very much. But whenever one of his family came into the room, he would twitch the end of his tail on the floor. He’s feeling much better now, and he still lets us know every day that we are his very favourite humans in the whole world.

So those are a few of Riley’s lessons, so far. There’s a thing called anticipatory grief – you can guess what that means, and we are feeling it now, but don’t tell Riley that either. Because for as long as we have him, we want to keep learning whatever he has to teach us.

Have you learned some important philosophy – either cliched or otherwise – from a pet? Tell us about it in the comments below!

“Anticipatory grief is a term describing the grief process that a person undergoes before a loss actually occurs.”