Now – about those new year’s resolutions…

5 steps for keeping your goals 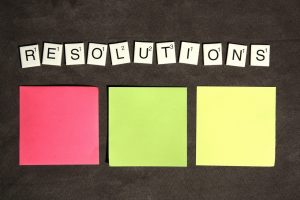 Many resolutions are resolved, promises promised and goals set during the bright early hours of New Year’s morning. And the vast majority of those resolutions won’t last the week. But if you’re serious about changing a habit or establishing a new routine, there are some steps that will help you keep those promises.

Dr. Ian Newby-Clark is a psychology professor at the University of Guelph in Ontario. He focuses on social psychology, researching topics like attitudes and beliefs, motivation, and our perceptions of ourselves and others.

Dr. Newby-Clark developed a set of five steps to change a habit (or keep a resolution) and has written about it in publications ranging from Psychology Today to Canadian Living. Thanks to the blog Zen Habits, here is Dr. Newby-Clark’s advice on tackling those goals:

If you work on changing more than one habit at a time you run a serious risk of overwhelming yourself and changing no habits at all. Consider Jim: Jim has resolved to exercise more and he has resolved to accomplish more at work. What could Jim be thinking? He’s going to fill his already busy schedule with regular exercise. Fine. But, he somehow thinks that he will also get more done at work? I hope he’s also decided to cut down on his sleep …

2. Create a Plan and Write it Down.

It is not enough to say to yourself, “I am going to get more done at work.” Think about it this way: What if you asked a randomly selected working-person, “Are you trying to get more done at work?” Almost everybody would say, “Yes, of course.” And the response would be the same if you asked about exercising more often, eating better, or paying more attention to international affairs. It’s in our nature to want to do better. We almost always want to do better. But wanting isn’t enough. You must make a plan. Write it down. Be as specific as possible. Does Jim plan to go into work early or stay late? Will he eat at his desk? Will he exercise good email and phone discipline? Jim needs to create a plan and write it down.

Now you need to refine your plan. In particular, you need to be realistic. Put your plan in a drawer for a day or so and come back to it with fresh eyes. Look at each sentence and ask yourself, “Really? I can do that?” Find someone who will give you an honest opinion. Have her read your plan and point out the bits that seem a bit pie-in-the-sky. You must do this because of what years of research shows: People’s plans are far too optimistic. In fact, in one study I showed that people’s ‘realistic’ plans for exercising more often are virtually the same as their ‘best case scenario’ plans. In other words, people think that everything is going to turn out as well as it possibly can. Well, I don’t know what world you live in, but in mine things rarely turn out in the best possible way. So, to avoid disappointment and discouragement, cast a critical eye on your plan and make sure that it is truly realistic. In the case of Jim, he should question the part of his plan that has him going in early and staying late everyday—even on Friday!

You’ve worked on your plan and it is much improved. You’ve taken out all of the bits about you leaping tall buildings in a single bound and cooking a three course meal at the same time. But having a good plan isn’t enough. You have to make mini-plans (research psychologists call them ‘implementation intentions’). For example, Jim plans to go into work an hour early on Monday, Tuesday, and Friday. He has also plans to stay late on Wednesday. How, precisely, will he change his work hours? Truly, the devil is in the details.

Jim must mini-plan. For the days that he plans to go in early, he should create a mini-plan the night before. He could tell himself: “When the alarm goes off at five, I will shower, get dressed, drink my breakfast shake, and drive to work.” For Wednesday nights, he could tell himself, “When it’s 5:30, I will eat a quick snack and work for another 2 hours.” Forming a mini-plan seems like such a simple thing. And it is. But, over and over again, researchers (led by Peter Gollwitzer) have shown the power of mini-plans to bridge the gap between wanting to get something done and getting it done.

You’ve heard this one before too, but it bears, err, repeating. Habits are behaviors that we do over and over again. They become almost automatic. How much thought did you put into your last habitual behavior? Not much, right? It kind of happened just by itself. Now that you have your refined plan and you have your mini-plans, it is time to make your new habit almost automatic. And the only way to do it is by repeating and repeating. And repeating. That’s because psychologists have shown that repeating a behavior over and over again means that it happens automatically or almost automatically. So, the great thing about repeating the behavior is that, eventually, you won’t really have to make yourself repeat it. The new behavior will just kind of happen on its own.

So, there you have it: Five things you need to know about effective habit change. I hope that you find it useful when working on changing a habit. And let’s wish Jim the best of luck too.