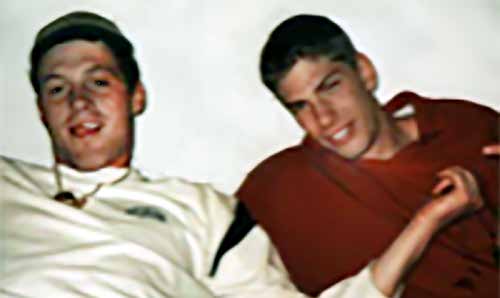 Jamie (left) and Roger were best friends from childhood.

I first heard of Jamie’s death on the radio on my way home from work. They said that a young man from Lower Sackville had died on a jobsite in Cape Breton. I thought: wonder who that was and if I knew them … never thinking that it could have been Jamie.

Jamie and I were best friends. We would celebrate our birthdays together as they were a few days apart. We were both Geminis … twins!

Jamie loved going fishing, and we would go often. Many Friday or Saturday nights we would be out playing pool then heading out to a bar or two; other times we would just sit around his mother’s kitchen with a case of beer and tell stories, and of course tease his mother.

An hour or so after that news report, Jamie’s mother called our house. She was crying and could hardly speak, and she said that Jamie had died from an incident at work and to come to her place. My parents (who were very close with Jamie) drove me to his mother’s house. Jamie’s parents, sisters, girlfriend and a few other friends and family members were there as well. That night and the following few days are still a blur to me. I can’t remember conversations or who I saw. I remember thinking ‘how could this have happened to Jamie? He was tough guy, a fighter … how could this have happened?’

Jamie was killed on the job on February 9, 2000. He was working for a marine construction company aboard a barge that was dredging in the harbour not far from Port Hawkesbury Nova Scotia. Jamie entered the hold of the barge, an airtight confined space that had no oxygen. Jamie lost consciousness and died.

As more details of the accident emerged I realized that this could have been prevented if Jamie had had the proper safety training and if the company had procedures in place for entering a confined space. As the years went on, my career progressed as a Gas Fitter. I continued to learn about safe work practices, safety training and employees’ rights. Due to some health issues in 2009 I had to leave the gas fitting trade and was given the opportunity for retraining. I enrolled in the Occupational Health and Safety program offered at Nova Scotia Community College. I completed the course in 2011 and started my new career in OHS. I now have over 20 years of combined experience, between my time as a tradesperson and as an OHS professional. I keep a photo of Jamie on my desk at work, not as reminder of my lost friend but more as a guide or a driver to help me educate employers on their responsibilities to provide a safe and healthy workplace for their employees, and to coach the workforce on being safety leaders and having the courage to speak up if they have any safety concerns.

I lost another childhood friend a year and a half ago on a jobsite where I was a Safety Advisor. The incident occurred a couple of hours after I had left the site for the day. I found out about it the following morning when I returned to site, and that my friend of 30 years was badly injured. I immediately called his foreman who was also his good friend and mine as well. I could tell when he answered the phone that he didn’t know about the incident as he was on vacation at his cottage. I told him there was an incident and that our friend was critically injured and expected not to survive. Our friend passed away a few days later as a result of his injuries.

Both of these incidents could have been prevented if the required safety training was provided along with safe work procedures and if safety guards were in place.

Returning to the jobsite where my friend and co-worker died was very tough for me. I thought – as a safety advisor could I have prevented this incident from occurring? Did
I overlook a safety concern? I still see some of his co-workers that were there with him the night of the incident. I always ask how they are doing and if there’s anything that I can assist with, as being involved or a witness to a serious workplace incident can have lasting effects on co-workers. I walk past the location of the incident often. I say a little prayer for him each time.

I have received and have made that phone call saying that a loved one or good friend has died while at work – no one should ever have to make or receive that call!

The last time I spoke to Jamie was the Sunday night before he left home for work. He said ‘I’ll see you Friday night when I get home’. I saw him Friday night … at his wake. We laid him to rest on Valentine’s Day. I still visit his mother’s house and she calls me on my birthday, but celebrating my birthday has never been the same and I haven’t gone fishing since Jamie’s death. I keep a picture of Jamie on my bar with an unopened beer beside it.

I got married in 2007. My best man, Corey, said in his speech that he was honoured to be my best man but that it should be Jamie giving the speech – not him. There wasn’t a dry
eye in the place after he said that. I missed Jamie a bit more on that day.