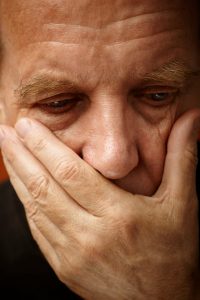 Jerry arrived at my counselling office angry and trembling. As I shut the door and sat down across from him, I could see he was livid. As he began to talk, it became clear that he had a bone to pick with the medical system of which I was a part. Melody, Jerry’s wife of thirty-five years, had suffered an aggressive form of cancer which the doctors had not immediately diagnosed. Following diagnosis, the couple experienced a string of medical gaffs and missteps that now, six months after her death, had become the focus of Jerry’s emotions. Actually, anger had pretty much taken over his life.

I asked Jerry to imagine the anger coming out of the top of his head. I then asked him how large a room he would need to hold it all. Jerry sat for a moment, grimaced and said, “a football stadium.” Jerry evidently had a significant resource of anger inside of him.

Anger is a common response to grief, especially in men who have a protective function built right into their DNA. Not only was Jerry angry that he had not protected Melody from the medical system, but as an ex-Military man, responding to threat was Jerry’s vocation. Jerry watched his wife die and he could not save her. This violated everything in his personal code and his vocational code. Jerry was angry at the world, but he was also angry at himself. To his mind, he let her die.

By the time I met Jerry, his anger had turned to rage, It took me a good half-hour to calm him down and get him in the room with me. It occurred to me that Jerry was hanging onto his rage like a small child holds onto a blanket. Jerry did not want to stop being angry. He did not want to let go of anger. I began to wonder if there was more to Jerry’s strong reaction than just a righteous rage.

Anger in men has another function when it comes to grief. It sometimes becomes a perfect and permissible distraction from pain and sadness. In other words, it is often easier for men to give themselves permission to be angry than to be sad. This is, in fact, exactly how many of us men are trained by society. Because protection and provision are so important to us, we are taught that tears and weakness are liabilities to our central role as protectors. The image of the unbreakable man is well-known in comic books and movies. We like our men strong and we like them heroic and they need to be able to take a lot of abuse before they shatter.

Grief and loss can strip away even the strongest man’s inner resources. William Shakespeare, considered universally as a guy whose insight can be counted on, said about grief: “Every man can master a grief but he that has it.” Even the greatest man cannot master grief. When it is in our lives, grief is the master. Getting lost in anger can provide men with a buffer between their loss and their pain. In other words, anger is a way of coping. It stalls and numbs our pain.

Jerry’s anger was helping him avoid the powerful overwhelming reality of his loss. This is not only true for men who have lost loved-ones, but can also be true for men who have experienced serious physical trauma at work. Any loss can trigger men to get angry. It is the protective function coming alive. The angry voice inside starts shouting: “What have you done? You should have been safer. How could you let this happen? You let everyone down.” A man’s great trick it to take this anger at self and turn it into anger at the world. Most angry men are angry at themselves. I know this because I’ve worked with thousands of angry men. It’s a fact, undeniable and true.

It is well known that men don’t grieve like women. Men often process strong feeling through actions and activities. They like to build and fix and renovate and do things. This is different from women who more often express their feelings through conversation, crying and bodily sensations. It is also generally understood that women have much to gain by learning to activate their grief as men do, and that men can become fuller persons when they explore their feelings.

My work with Jerry was to help him see through his anger to the sadness and hurt which was fuelling it. Anger is a by-product of sadness and loss. It is like the crust of the earth over the molten core. When we plunge through anger, we find a vast sea of sadness. When Jerry was able to put his anger aside and concentrate, not on doctors and diagnoses, but on his wife and her death, a volcano of sadness erupted out of his heart. Secretly, Jerry feared anyone seeing him vulnerable and weak. Jerry mistook his army persona for his personality. Deep inside, Jerry was devastated and he felt totally ill-equipped to express it.

Anger isn’t wrong. It’s a healthy response to loss. But we can get stuck in anger and forget that we are also sad and in pain. Being vulnerable is not easy for men. But if we want to be mature and well rounded, exploring our feelings and our vulnerability is essential, and brings great relief and healing.

This article first appeared in the Summer 2014 edition of our free quarterly newsletter, Threads. For more personal stories, news, and information from Threads of Life and our family members, subscribe here.

Roy Ellis
Bereavement Coordinator at Capital Health Integrated Palliative Care Service
Roy Ellis is a therapist, author and speaker in Nova Scotia. He is the Bereavement Coordinator with the Integrated Palliative Care Service of the Nova Scotia Health Authority where he meets the psycho-spiritual needs of the dying and grieving. He is a Certified Spiritual Care Practitioner (CSCP) with The Canadian Association for Spiritual Care, and received his Masters of Divinity from Queen’s University. Roy has worked extensively with Threads of Life, facilitating sessions at family forums, volunteer training, and contributing articles. www.royfellis.com
Latest posts by Roy Ellis (see all)