With all that we know about our world and ourselves, there continues to be one mystery science can’t penetrate: death. What is dying like? What happens to us after we die? With her book Opening Heaven’s Door, writer Patricia Pearson aims to cast a light on the human experience of death. Ultimately, her book offers reassurance about what lies beyond that door, and also assurance that there is indeed mystery here.

Pearson introduces herself as a sceptic, a journalist, from a family not “in the habit of experiencing ghosts” but in short order her family lives through the deaths of Pearson’s father and her sister, and she is brought face to face not with ghosts, but with phenomena that suggest there is more to dying than just biology.

Pearson embarks on a journey – documenting, research, interviewing and reviewing studies. The book delves into different categories of phenomena, including the stories of people who have been near death and recovered, observations of those close by when someone else is dying, and those who have received “signals” or sensed a presence when a loved one dies. Common themes across many of these experiences are a sense of light, overwhelming love, peace and welcome.

Most of us have read or heard the stories of near-death experiences – if anything, their message about  “going towards the light” has become a cliché. But Pearson’s first-hand accounts from palliative care doctors and nurses, family members and people who nearly died are so moving and compelling, they’re hard to laugh off or explain away. Pearson spends time with a doctor who nearly drowned when a small plane crashed in a frozen northern Ontario lake. The doctor details her out-of-body experience, the light and love she felt, and the guidance she received as she struggled to swim to shore. The doctor’s is just one of many fascinating stories Pearson relates, interspersed with her own questions and observations, and told with humour.

But core to the book are Pearson’s own family stories. The night her father died unexpectedly, Pearson’s sister, who lived in another city, woke up with a powerful sense of healing and joy: “I felt hands on my head, and experienced vision after vision of a happy future.” Later, Pearson watched the same sister dying of cancer and talking with calm and amusement about a journey she was about to take. When she died, both her mother and godmother – thousands of kilometres away – awoke in their beds.

The book deals with the sceptics and the science. It digs into the psychology and the statistics of the few studies that have been done. But it’s these stories of real people – often sceptics themselves – that make it such an engaging read. In account after account, the dying speak of going on a journey, going home and being accompanied by loved ones who’ve died before them. Family members tell of sensing their loved one’s presence, of being reassured and feeling loved and at peace.

As she started her research, Pearson says, she discovered that many, many people have had such experiences – she calls it “startlingly common, not rare” – but families are often reluctant to talk about them because the memories are so intimate, and are so often discounted by others. Once she began talking to people, though, the stories came tumbling out. Even a post on her blog after Opening Heaven’s Door was published yielded dozens of comments, most from people with a story to share. “It struck me again,” Pearson writes, “how powerful and raw our experiences around death are, how carefully we keep them concealed and yet how close to the surface they stay.”

Of the “radical mystery” surrounding death, Pearson is not willing to commit much beyond calling it “a door…that leads elsewhere”. Of course, not everyone will have this kind of experience in the face of death, and Pearson’s book could leave some feeling left out or worried that they somehow missed a message. But for anyone who is grieving or facing the death of a loved one – which is, of course, all of us humans – the book at least offers some solace that those stepping through that door may find peace and love there.

“This, then, is what we hear from the sensed presences and the dying. ‘I’m going home now.’ ‘I have to go home.’ Pearson writes. “Could it be that the dying and the dead are trying to tell us something that is difficult to convey? We’re so busy defending the fact that we saw or heard them at all, we can’t even arrive at the point of wondering what they mean.” 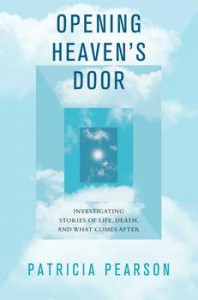