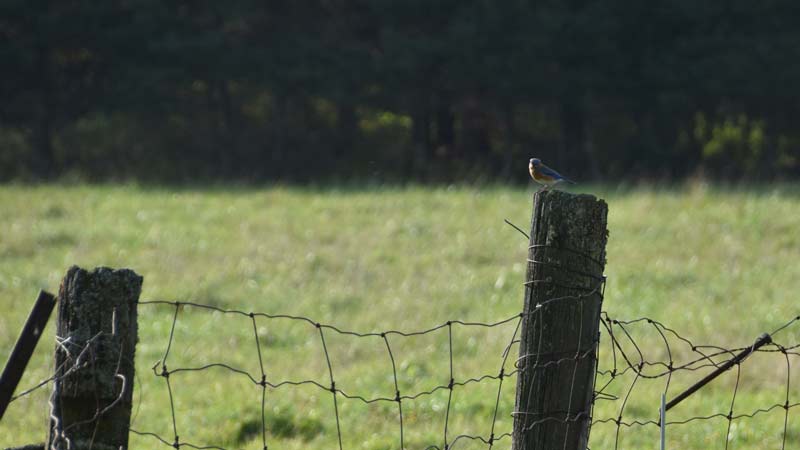 The radio is almost always on at my house. As former reporters, my husband and I like to know what’s going on in the world. But there’s no question that it affects your mood. This morning, I had just decided to listen to music at my desk instead of news radio, when I looked out the window. An Eastern Bluebird fluttered down from the big balsam poplar tree into the grass. As I watched, a couple more settled in the branches.

The bluebird has been considered a symbol of happiness and good fortune possibly since the Shang dynasty in China, thousands of years ago. European and Native American folklore both feature bluebirds (according to Wikipedia at least!) and of course we all know songs that connect bluebirds to hope and encouragement. An American songwriter chose bluebirds to fly over the white cliffs of Dover in the famous war time song, even though bluebirds aren’t native to England. And for the younger set, there’s They Might Be Giants’ song Birdhouse in your Soul, with the phrase “bluebird of friendliness”.

Reasoning that I could use some photos for work, I grabbed a camera and crept outside to try to capture these little migrants. We didn’t used to see bluebirds around here, but in the past five or ten years they’ve begun to show up, mostly on their way through in the spring and fall. I’m always pleased to see them, though I can’t exactly explain why. Today, there was no time for shoes so I pulled off my socks and tiptoed through the wet grass in my bare feet, trying to get closer. It’s a beautiful October day, very warm, and the grass was cool and spongy. It was a happy little moment, and I’m inordinately proud of my photos.

The bookstores and web seem full of books and studies about how to be happy. The Happiness Project, The Happiness Advantage, The Book of Joy, Stumbling on Happiness, The How of Happiness, The Happiness Hypothesis, Getting Back to Happy, etc etc. Much of the advice boils down to a couple of pretty basic concepts: be generous to others, and take time to be in the moment and notice the little things.

In a time when the news has reached beyond bad, to disturbing and frightening, the bluebirds are my little thing. I decide not to dwell on the fact that it’s likely climate change that has brought more of these birds into our area. They were listed as “rare” in the late 1970s, and have since been removed from the endangered list – so there’s some good news!

There are so many valid reasons to be sad, anxious and fearful. I believe it’s important for all of us to stay informed and play an active role in what’s going on in our country and environment. But it’s also healthy to look away from the big things now and then, and gaze at the little things. It’s something I forget all too often. As the song tells us, “make a little birdhouse in your soul”.