I was warned that the 10-year mark was different than year one or even year five and that I need to pay attention to that. With that in my back pocket I didn’t really think too much about it until I was forced to do just that: think about it.

I thought I was doing pretty good with this grief journey. I was, after all, nine years in and three years deep in trying to face losing Lance. So, like really, how was the 10th anniversary going to be any different? And true to what I do, I ignored it until I hit me harder than I was ready for. While I was warned about the 10-year mark I really had no idea and figured how bad could it really be? Boy was I wrong! I threw myself into my speaking engagements and getting ready for the Steps for Life walks, parenting my daughter, and refused to acknowledge that I was drowning. I was not going to let the 10-year mark derail my process, but if I was honest, that was just another step in my healing process.

The 10-year mark fell in the middle of my one of the busiest weeks and as my mother says I was a yo-yo so everything seemed normal and, well, I was “off” but it was May so that also seemed normal. 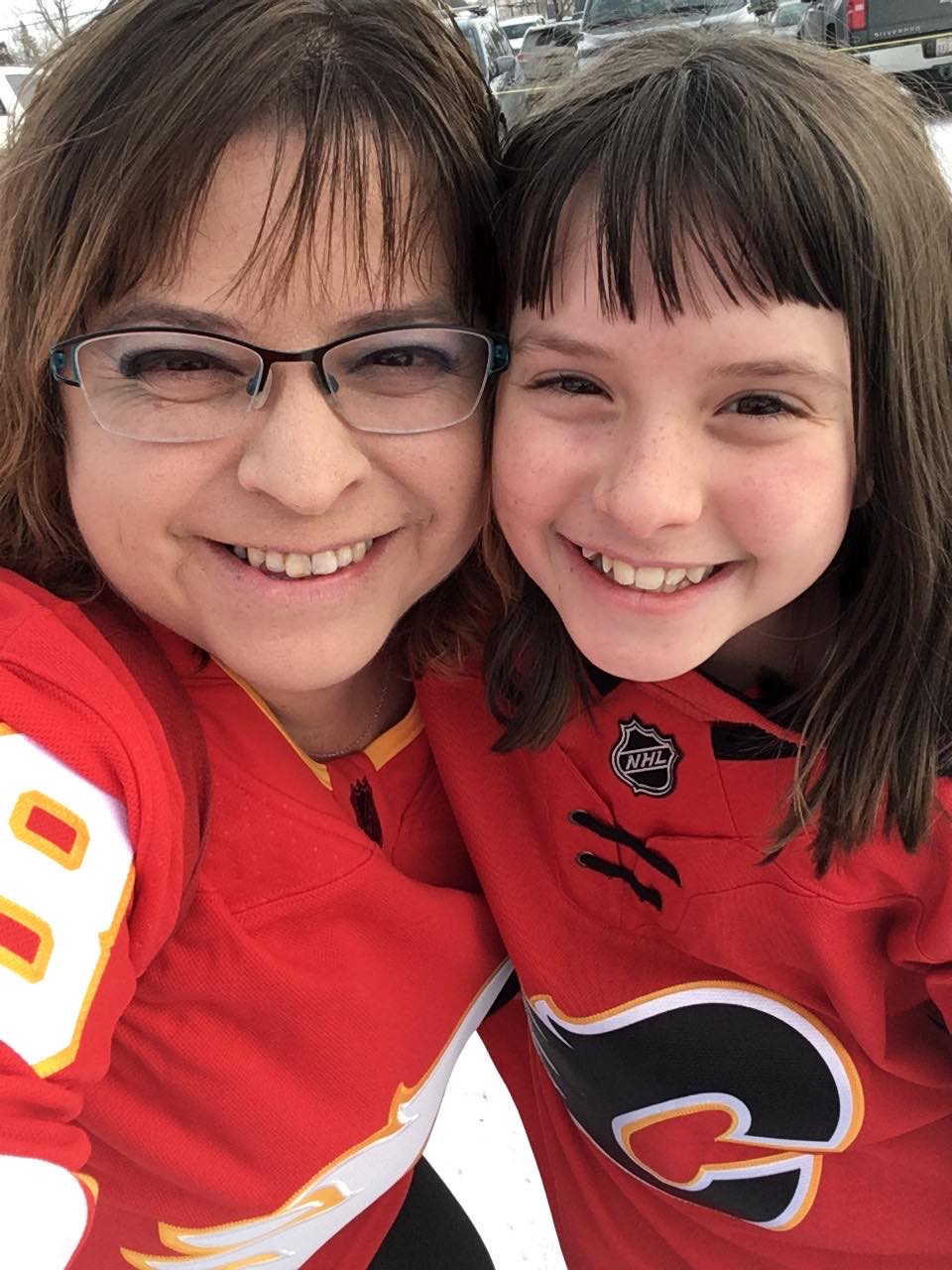 Rebecca and Caitlin out cheering for their team — the Flames!

On May 8th, the anniversary of Lance’s death, I pulled my daughter from school and I tried to make that day special. We were joined by my mom and my brother and his wife and two kids. We went for breakfast and then went to the zoo, had supper, went to the cemetery and then finished the night opening a bottle of wine that we had bought with Lance 12 years ago. But if I am honest I wasn’t there…..It was a priority to make this the best day I could for my daughter’s sake … and I would worry about me later. I was so tightly wound up I didn’t notice. It wasn’t until the next day, that I hit a brick wall that would leave me curled under a blanket and feeling so overwhelmed with everything. I pulled back for a lot of things for about three weeks and just had to take time to really think about what this 10-year mark meant for me, and what moving forward needed to look like.

Boy, 10 years; it isn’t just an anniversary. It means so much more than that. It’s 10 Christmases, birthdays, anniversaries; the list goes on. To top it all off, our daughter would be turning 10 that August, and as I was pregnant with her when Lance died, he missed every single one of her birthdays. It was almost like a final ‘you are on your own’ even though I already knew that. I really needed to acknowledge that and let me feel all those feelings and emotions, but they hit so hard and fast that I felt like I couldn’t breathe. And so, I took the rest of May. And then I said ‘ok it’s time to figure out what I want this to look like moving forward.’

So, what has transpired as I now get ready for the 11th anniversary? Oh, I have come so far! Yes, I am a widow. Yes, I am a single mom. And yes, this grief will always be a part of my life. But this isn’t what my legacy is in the future. I have a renewed passion to change how society and our culture view grief and loss and those who are going through grief and loss. I am also so passionate about making workplace safety first and foremost in people’s minds. Going into year 11 I truly feel the happiest and healthiest I have been. And I feel like that chapter is closed. It’s been a hard decade but now it’s time to close that chapter and to open a new one. That doesn’t mean I can’t look back in that chapter and learn more because there is still so much to learn. But it’s time to see what is around the bend….to let myself find myself away from what the last 10 years has shown me or told me who I was. I am not the same person, but I like the person I am turning into. It’s time to show my scars so that others know they can heal, too. It’s time to say ‘let’s see what is next’. There is a much bigger picture and plan at play here then I ever could have imagined. I have changed my thinking from ‘why me and why did this happen’ to ‘why not me and how can I grow and change?’ There is so much more to do and it’s time to see what is around the bend.

Lastly, I am so thankful for my family, friends and Threads of Life for coming alongside and supporting me. I am so looking forward to the next chapter of my life.

Rebecca Orr
Rebecca Orr is a mom, a widow, and so much more. Her family was forever changed by a workplace tragedy. She now helps other families as a Volunteer Family Guide and shares her story as a member of the Speakers Bureau.