“I knew in my heart that something was wrong”

by Elizabeth Stewart with Kate Kennington

It is a huge understatement to say that the grief journey is difficult and hard to travel. What we hope for those affected by workplace tragedy is that they find a support network of family and friends, find ways to honour their loss and to learn to trust in their resiliency. Loss changes us and grief doesn’t ever leave us entirely. However love doesn’t end either. Love will always remain. 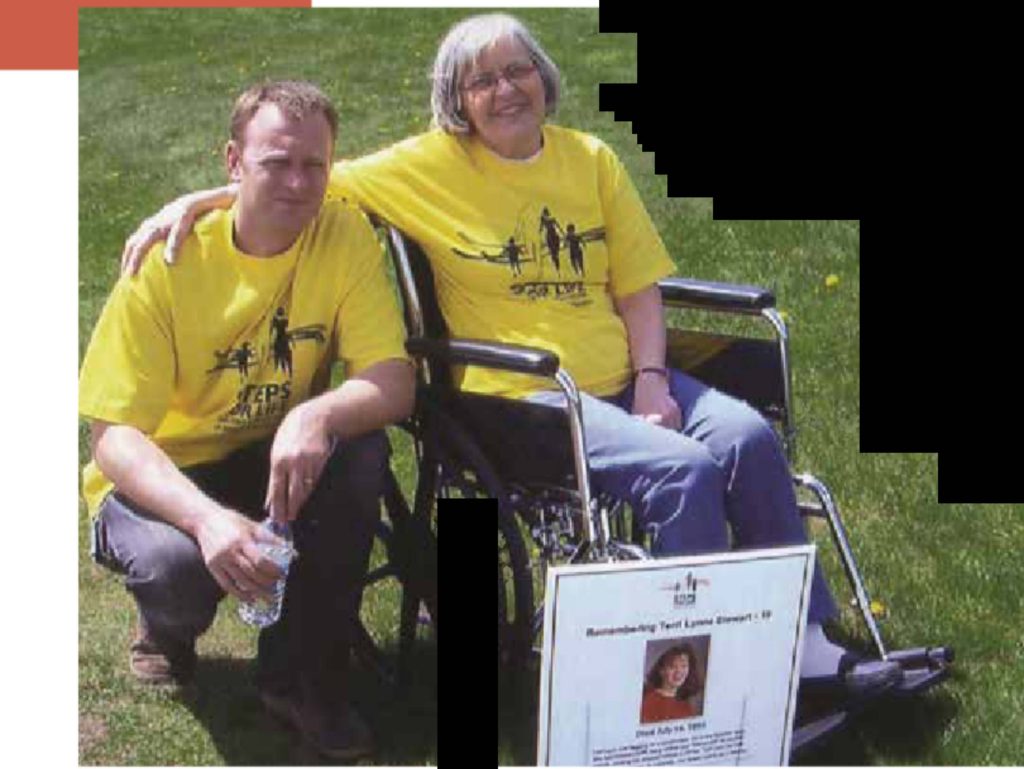 Elizabeth, known as Liz to her friends, spoke with Kate Kennington and shared her story and her love for her daughter, Terri Lynn. There is no questioning either Liz’s resilience or the strength of her love.

Liz has no bad memories of Terri Lynn. “We never had a disagreement. How many parents can say that? Terri Lynn was a delightful child, a delightful teenager and a delightful young woman. She always had all kinds of friends. She loved people and everybody loved her. She was a special young lady. A real special lady.”

With just 18 months between Terri Lynn and her older brother Jason, they were very close. “They did everything together, shopping and went out clubbing together when they were older. They were just one grade apart and al­ways went to the same school. They even had the same friends. To this day, Jason still finds it hard to talk about her.”

“I loved that we were not only mother and daughter, we were best friends. We would go somewhere together in the car and the neighbours always knew because we would get in, put in a tape, turn up the volume and start singing. We were always laughing. When Terri Lynn was away at university I sent her a care package for Valentine’s Day that included a box of smarties. There was a place to write on it who it was to and who it was from. I wrote ‘To: My Best Friend, From: Mom’. Later I found that she had cut that out from the box and kept it. I still have it. I’ll never get rid of it. I wouldn’t take a million dollars for it.” Some things are truly priceless.

Always involved at school and in her community between Girl Guides, highland dance, friends and babysitting it was evident even from her first jobs that “Terri Lynn was someone you could put into any situ­ation and she would be happy. She worked part-time at the playground at the mall. She would come home with letters and presents from the kids. She wasn’t allowed to go into the ball pit but the kids would drag her in anyway to play. She loved the little kids and they loved her. I still have some of the notes from those kids. Terri Lynn was at university and wanted to become a teacher. She would probably have taught in elementary from kindergarten to grade 3. She had so many goals and I know she would have achieved every one of them. Ultimately she wanted to marry and have five kids. No more and no less. She even had the first girl name picked out. She would have been a wonder­ful mother.”

The summer that Terri Lynn was 19, Liz was able to get her a job at the construction company she worked at in Moncton. Terri Lynn was a flagger alongside the highway on a construction site. “She loved being with people and enjoyed all the people. She en­joyed the job and wasn’t frightened. Just two nights before she was killed Terri Lynn said to me, ‘You are paranoid about me standing out there Mom aren’t you? I’m not afraid.’ I live with the guilt that I got her that job and wonder if only I hadn’t gotten her that job. My brother tells me not to think that way. That you don’t know what else might have happened.”

Terri Lynn had to be at work earlier than Liz so a coworker who lived nearby would pick her up in the morning. He and Terri Lynn got to be good friends. On July 16th, 1993, Terri Lynn relieved one of the other workers who had also become a good friend. “The other girl had only turned and taken five or six steps when Terri Lynn was hit. A car with a travel trailer on the back rear-end­ed the first car that was stopped. The stopped car struck Terri Lynn.”

“I was sitting at my desk at work and I knew that something was going on. Everyone had left the office and I could hear whisper­ing. I knew in my heart that something was wrong. The first thing I thought of was Terri Lynn and sure enough, Wayne, the head of the paving division came and said we had to go to the hospital. It is a day I will never forget. It was a Friday and it rained a bit. I’d like to for­get that day but I never will.”

“I remember as we drove to the hospital we didn’t say a word. When we pulled into the emergency parking lot I said to Wayne ‘Is she going to die?’ but he didn’t answer. I couldn’t find my son, my husband was away working up north and I couldn’t find my sis­ter. My father-in-law was a doctor and was there. After they told me Terri Lynn had died it was just like a scene from the movies. I asked why can’t I cry? What is wrong with me? My father-in-law told me I was in shock. I called my friend, Bonnie and after she came I don’t remember. I don’t even remember leav­ing the hospital.”

“Bonnie took me home and neighbours were standing in the driveway. It was hard. I don’t really remember anything until the day of the funeral but I know that the house was full. I don’t remember who was at the house. You kind of block that out -your body’s way to protect you. I wish it had never happened but it did. Unfortunately, it is something you have to deal with. It has totally affected my health. It is not the way it is supposed to be. The day we buried her I kept thinking, this isn’t the way it’s supposed to be. She should be doing this for us. I didn’t want to leave her; she didn’t like to be alone. I do know that my little girl left this life knowing she was loved.”

There are many ripples to Liz’s story. Terri Lynn’s co-workers were devastated by her loss. There were two girls who were especial­ly close to her and they asked for photos to remember her by. The young man who Terri Lynn carpooled with just could not wrap his head around what had happened. There are some things that don’t and never will make sense.

The man whose car was rear-ended and hit Terri Lynn turned out to be a neighbour and knew the Stewart family. “I felt sorry for him. We wrote a letter to let him know that we didn’t blame him. I needed to see him but was told that he didn’t want to see me. So I arranged to just be there one day when he got home from work. When he saw me he went sheet white. I said we do not hold you respon­sible for this. At the end, I gave him a hug.” Sometimes there aren’t words for what the heart would like to say.

The case went to court and the driver of the car with the trailer was charged with driving without due care. “I did not go. I couldn’t nor did my husband. I remember driving home from work one day and hearing the news on the radio and it was announced. He walked away. When I got home I asked my son if he had heard the news but he hadn’t. I told him. Your sister, my daughter is dead and he walked. I couldn’t believe it.”

“There is not one day that has passed by that I don’t think of her. Not one day that I don’t mention her name. People will say to me ‘I didn’t know what to say’. I tell them, you don’t have to say anything. Just come over and give me a hug. I will talk about Terri Lynn.” You can hear the smile in Liz’s voice when she talks about her daughter but that wasn’t always the case. “It took a good year or more before I could talk about her without breaking down and losing it. One day her dance teacher brought over a tape of Terri Lynn dancing and I kept touching the screen. It was her.”

“It took me a long time to get the courage to go through her room. The door was shut from July to November. I couldn’t go into her room. Going through her things felt like such an inva­sion of privacy. Finally, a friend came in and said it was time. It was Remembrance Day and was a bright sunny day. Probably one of the hardest things I had to do. The room was just as she had left it. That was hard. My friends got me through. I thank God for my friends.”

Looking back at the past 24 years, Liz reflected, “the biggest impact is the loss – part of our family is gone and will never be replaced. It is just such a void in our lives not having her. Just void. I have to talk about her. The hole that is left in my heart and the void that is left in our fam­ily, not just for me and Jason and her father, it is the rest of our family. She was so loved and is so missed. Her loss is a void in our lives.”

With the attitude of sink or swim, Liz coped. When asked what helped her, she responds without hesitation. “My three grandsons. Every time they walk in that door I think of Terri Lynn. How much she would love and spoil those kids and do things with them and take them places. And my best friend Donna. I can call her for anything. Friends get you through.”

Liz has many words of wisdom that come from her experience. “You can’t give up. You just can’t. You have to go on. You will never forget and it is something that you have to live with for the rest of your life. You have to learn to cope. Somehow you just have to do it. There are days you get up that you don’t want to but somehow you do. There are others that you have to think about. My kids always came first. I can’t be in a state of mind that I can’t be any support to my son. He needs love and understanding.”

“I think it is important to keep Terri Lynn’s memory alive. It is so important that people know how special she was. My special girl. That is what she was and what she is.”